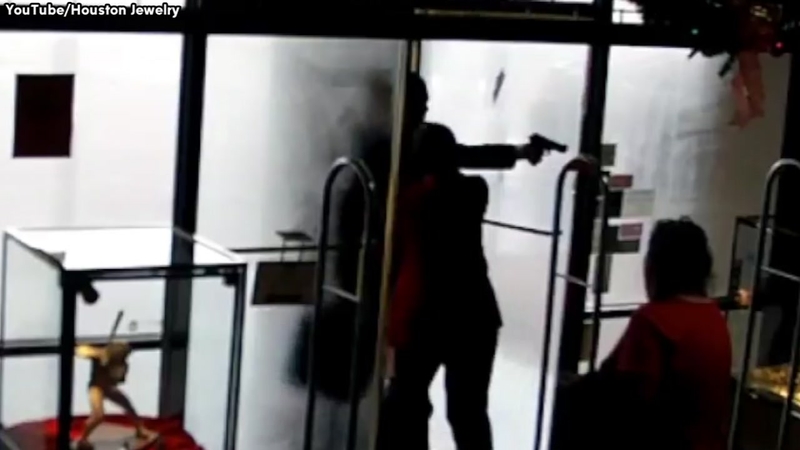 Grandmother pushes robber out of jewelry store as he opens fire

HOUSTON, Texas (KTRK) -- Early Tuesday morning, as employees of Houston Jewelry began to open the shop for business, they did not anticipate the holiday crime that would unfold.

Someone hid around the corner from the Westheimer store with a getaway driver wearing a dark suit, dark sunglasses and carrying a briefcase waiting for the doors to open.

Two veteran employees, Judy Memmel and Kathye Parker had just gotten to work at 8:45 a.m. The two women, Memmel, a grandmother of five, and Parker, a grandmother of three, were about to lock the door behind them when a man tried to push his way in.

Judy first told him, "We're not open," but when she saw his gun, she yelled, "No! You are not going to come in!"

Then she pushed him out the door as he began to fire his gun three times at close range, just inches from her face.

One bullet hit a jewelry display case, one went into the ceiling, and the third nearly hit another employee.

"Some women panic, scream, yell, I don't do that...I get mad, and to me, that was the thing to do: give him a shove," the employee who was nearly hit said.

Parker ducked for cover and went to hit the store's panic button to alert officials. The suspect then fled the store and got in a dark blue Impala waiting outside.

Even after what had taken place that morning, Memmel and Parker stayed on the clock and finished their workdays.

When Memmel was asked how she stayed so calm, she responded, "Well, I'm a ballroom dancer."

The store has more than 80 surveillance cameras, as well as HPD officers that provide security. Houston Jewelry says it has tightened security since the incident.

"We are one of the oldest family run businesses in Texas and we couldn't be where we are without our employees. That being said, when it comes to confronting an armed criminal we value a human life more," said Houston Jewelry owner Rex Solomon.