Gov. Gavin Newsom will not be recalled in California election, ABC News projects 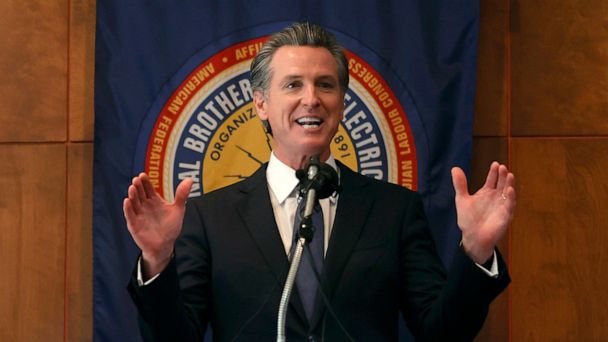 California has voted not to recall Gov. Gavin Newsom, according to a projection from ABC News based on exit polls and an analysis of votes.

With 65% of the expected vote reported so far, 66% of electors in Tuesday's special election are against recalling the Democratic governor.


"I'm humbled and grateful to the millions and millions of Californians that exercise their fundamental right to vote, and express themselves so overwhelmingly by rejecting the division by rejecting the cynicism," Newsom said late Tuesday night in his victory speech. "By rejecting, so much of the negativity that's defined our politics in this country over the course of so many years."

Californians were faced with a two-part question -- if they would like to recall Newsom and who they would like to replace him with if he was recalled. Newsom needed more than 50% of voters to vote against recalling him to keep his job as the top executive of the most populous state.

Forty-six candidates were competing to replace him, and while the question is moot, nationally syndicated conservative radio host Larry Elder -- the frontrunner going into the election -- leads that pack with 44% of the vote currently.

In post-election remarks, Elder conceded the recall was unsuccessful.

"Let's be gracious in defeat," Elder said, after he was met with boos when he referenced Newsom by name. "We may have lost the battle, but we are going to win the war."

This is the fourth time in the nation's history that voters have had an election to recall their governor, and only one governor has been recalled in the last century. In 2003, Democratic California Gov. Gray Davis, facing extremely low approval ratings, was recalled and replaced with former Gov. Arnold Schwarzenegger.

This time, Republicans have a crowded primary field and, before nationally syndicated conservative radio host Larry Elder's entrance into the race, the field was without a clear leader.

Former San Diego Mayor Kevin Faulconer was once thought to be the front-runner and is seen as the moderate in the race. Businessman John Cox, who was the GOP's gubernatorial nominee in 2018, campaigned across the state with a live bear and an 8-foot ball of trash.


Reality star and Olympic gold medalist Caitlyn Jenner entered the recall field, although she spent some time out of the country in Australia, reportedly filming a celebrity edition of a reality show.

Going into the election, numbers appeared to be in the incumbent's favor, but Newsom still recruited some of the biggest Democratic heavy-hitters to stump for him, including Vice President Kamala Harris and Sens. Elizabeth Warren and Bernie Sanders. President Joe Biden hit the trail with Newsom to close out his campaign in Long Beach, California, on Monday night.

"This is not hyperbole. The eyes of the nation are on California because the decision you're about to make isn't just going to have a huge impact on California, it's going to reverberate around the nation, and quite frankly not a joke around the world," Biden said Monday.

According to preliminary exit polls, 55% of voters participating in this election approved of how Newsom is handling his job as governor. In 2003, exit polls showed Davis' approval rating at 26% -- a stark difference from how the voters perceive the current governor.

Historically, gubernatorial recalls produce similar vote margins for the governor holding office as they had in their last election, according to recall expert and senior fellow at Wagner College, Joshua Spivak. Gray Davis got 47% of the vote in 2002, and 44% in 2003 when he was recalled. In Wisconsin in 2010, Scott Walker was elected with 52.2% of the vote, and defeated his recall with 53.1%.

Democratic voter registration in the Golden State largely outpaces that of both Republicans and independents, putting Newsom at an advantage. So far, Democrats are leading both groups combined when it comes to returning their ballots: Democrats have returned nearly 4.1 million compared to the 3.8 million Republican and independent ballots that have been returned, according Monday data from Political Data Inc.

Democrats have attempted to nationalize the race to increase enthusiasm, warning of lawmaking similar to that of Republican-led states.


Harris, a native of the Bay Area, rallied with Newsom on Thursday and warned of the national consequences the recall could have if it was successful, referencing the recent change in abortion laws in Texas, among other things.

In preliminary exit polls, a plurality (31%) of voters said the pandemic was the most important issue facing the Golden State, and Newsom spent the campaign warning voters about potential policy changes surrounding the coronavirus if the recall passed. His team released an ad painting the election as "life or death," and the governor singled out Elder's promises that he would immediately end mask mandates and testing for state employees.

Preliminary exit polls also showed support for Newsom's coronavirus policies. Only about 3 in 10 voters feel that mitigation measures put in place by the governor are too strict, and 7 in 10 support the state requiring students wear masks in schools Additionally, the vast majority of voters feel the pandemic is either getting better (39%) or staying the same (31%), rather than getting worse (24%).

Ahead of the election, Republicans, including former President Donald Trump, were already baselessly raising the alarm about the potential for voter fraud, based on conspiracies about the 2020 election. Trump claimed that the election was "totally rigged," even though the state has been reliably Democratic for decades, voting against Republican presidential candidates in every election since 1992.

Elder warned of "shenanigans" last week -- though he told ABC News Saturday, "So many people are going to vote to have it recalled, I'm not worried about fraud."

Elder previously said he believed Biden won the 2020 election "fairly and squarely." But he was encouraging his supporters to call a hotline to report issues of voter fraud for litigation purposes in the recall, saying he fears there will be integrity issues similar to those of the 2020 election -- despite there being no widespread evidence of voter fraud in November.