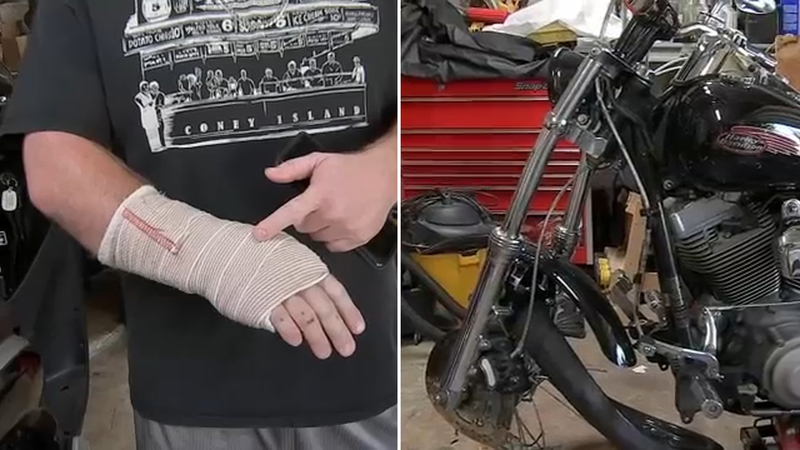 A truck was stolen and as a few neighbors tried to help, the desperate thief ran over one of them.

Cameron Hendrix says Lumber Jack Drive is usually a quiet street. He says the neighbors take care of each other.

"I've lived here about 26 years and I know any of my neighbors would have done the same thing for me, if somebody would have stole something of ours, you know?" said Hendrix.

He never imagined he would get hit by a truck on his own street.

"Honestly, I was like 'Aim for the grass' because I knew he was going to hit me," said Hendrix.

As his neighbors were having a garage sale, Hendrix was in his garage getting ready to leave for Galveston to the Lone Star Rally.

He says a man left his truck running while he got out to look at the stuff for sale.

Neighbors say that's when a man walking a pitbull puppy threw the dog inside the truck and tried to drive off.

Hearing the commotion down the street, Hendrix decided to help.

"I got on my bike and just trying to find him, but by the time I found him, they had him kind of boxed in and he just kind of went the wrong way on the road and just straight into me," said Hendrix.

The thief got away.

Hendrix is now in a cast and stuck home from work with thousands of dollar worth of damage to his Harley.

His biggest pain is knowing the guy who did this to him got away.

"I wanted to catch him, man. That was the goal," said Hendrix.

Police are still looking for the suspect involved. Investigators say he was seen driving a gray 2007 Toyota Tacoma.