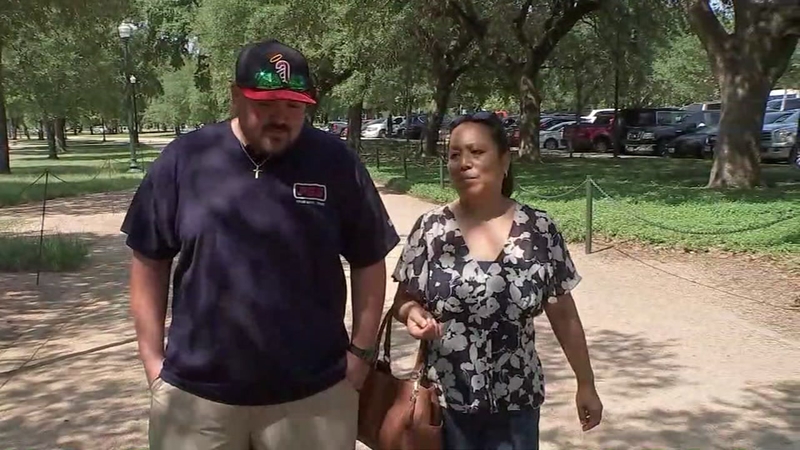 HOUSTON (KTRK) -- "Everything I own was in this purse, money, credit cards and bank cards," said Maria Hager who is here from West Virginia getting cancer treatment at M.D. Anderson.

Hager's cancer pills, which she has to take every 12 hours, were also in her purse. Everything was gone in a matter of minutes.

"That's the closest parking space (we found) because my parents are elderly," Hager pointed out showing how close her parents' car was to the park.

It just so happened that Maria's dad had recently been diagnosed with cancer as well and will soon undergo treatment in Houston too so she was showing him around Hermann Park because it was going to be the peaceful place where both father and daughter would spend time together after getting treatment.

"This is a place we are going to be every day whether it's a tough day from doctor appointments or treatments," she said.

These small town folks soon got a taste of the big city crime.

"(It was) my fault I accidentally forgot my purse was left on the floor," she said.

There was broken glass everywhere and the one thing she truly treasured was gone.

"When I realized I lost that, that's when it hit me how devastating this was," she said in tears.

Not long after the crime had been committed Tony Valdez had started his lunch break walk near Hermann Park. Valdez stumbled across Maria's purse nearby.

"When I was picking up everything I noticed a passport," he said.

A big believer in fate and faith, Valdez knew he was meant to find the owner of the purse.

"When I saw M.D. Anderson on the bottles that's when I like (said) this is not a normal sickness it's something big," he said.

After several calls, finally, Valdez was able to connect with Maria. She soon broke down when Valdez mentioned the passport.

"When she told me it belonged to her brother who had passed and I heard her voice cracking," he said.

"Aside from my cancer pills this was the most important thing in my purse that I cannot afford to lose," said Maria in regards to the passport, which she helped her brother get. "I always promised (my brother that I would) take him wherever I'm at and he's in Houston while I'm getting cancer care."

Maria is now working with Houston police to track down the suspect who took her cash and cards. As for crime at Hermann Park HPD said it has not seen a spike but it is definitely an easy place to target.
Report a correction or typo
Related topics:
societyhouston
Copyright © 2022 KTRK-TV. All Rights Reserved.
TOP STORIES
Coast Guard suspends search for Houston woman off Alaska coast
Child left alone starts E. Houston apartment fire
The Railroad Killer
10-month-old girl left in hot car for 'several' hours, HPD says
Your chance of rain is going up this weekend
Known white supremacist threatening armed standoff at Texas Capitol
Katy ISD employee's husband accused of stabbing wife to death
Show More
Judge: COVID-19 asylum restrictions must continue on US-Mexico border
Track your fitness with an app? Doctors wary about certain ones
Harris County Election Day process under fire by Republican Party
Woman stopped at US border with condom-wrapped fentanyl
Parents reminded they're 'rolling the dice' on kids without COVID shot
More TOP STORIES News