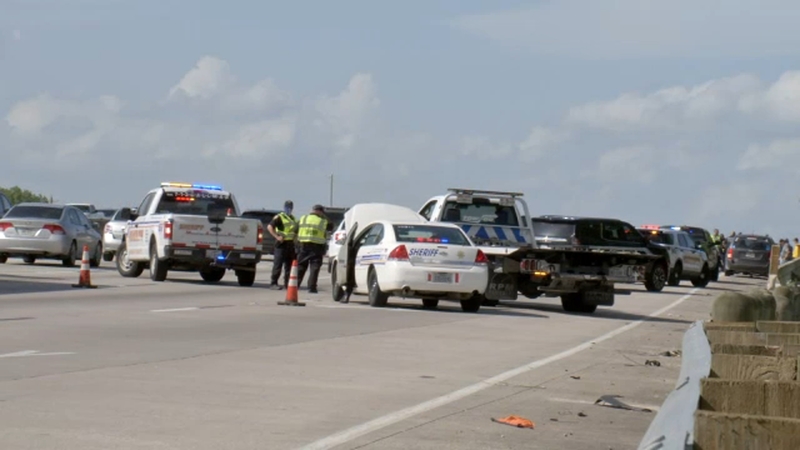 HOUSTON, Texas (KTRK) -- A driver in his 20s was rushed to the hospital with gunshot wounds that he suffered in a shooting that may have stemmed from road rage, according to the Harris County sheriff.

Sheriff Ed Gonzalez said his deputies responded to the northbound lanes of Eastex Freeway near East Mount Houston at about 3:30 p.m. Wednesday. They found a sedan riddled with bullet holes.

According to the sheriff, a witness, who heard the shooting, stopped to help the driver in the sedan, applying pressure on his wound until emergency workers arrived. That victim was rushed to the hospital, where his condition was listed as critical.

Harris County Sheriff Ed Gonzalez spoke to Eyewitness News from the scene of a shooting that may have sparked from road rage.

Deputies also found a child car seat in the victim's car, but the sheriff tweeted, "Thankfully an infant wasn't on board."

As for the suspect or suspects who drove away from the victim, Gonzalez said the best description they have of the vehicle in the case is a white or cream-colored SUV, closely resembling a GMC Tahoe.

Update: Shooter was in a white or cream colored SUV. Victim, described to be in his 20s is in critical condition. A Good Samaritan stopped to try & render aid. Hope he pulls through. I see bullet strikes to back window & empty child car seat. Thankfully an infant wasn’t on board https://t.co/yLFAj06zYG

While the investigation goes on, traffic on the outbound Eastex Freeway was flowing again by 5 p.m.

Houston police said there were eight road rage incidents that led to fatal shootings in Houston in 2020 compared to five in 2019.