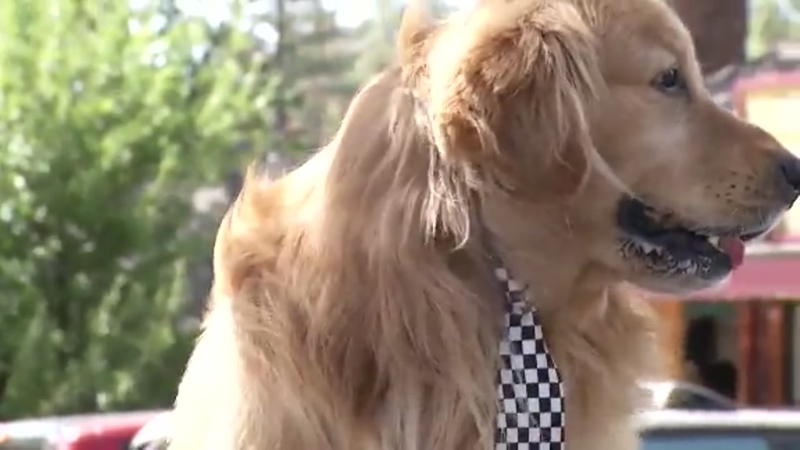 How did a furry friend become mayor of Idyllwild?

IDYLLWILD, California -- A golden retriever has become more than man's best friend for a small community in California. In fact, he's actually the town's mayor.

You can find this golden retriever cruising around on his personalized pickup truck. But don't worry, he doesn't drive.

"His role is to make the world a better place by conveying unconditional love and doing as many good deeds for others," said Phyllis Mueller, Mayor Max's Chief of Staff. "My role as the chief of staff is to help run the vision of the mayor's office for Idyllwild, so we actually run an actual mayor's office."

The two make public appearances everyday to interact with the community, attracting locals and tourists.

"Max is awesome," visitor Andrea Valadez told KMIR TV. "He is super friendly and he lets my son give him treats."

Mayor Max has been in office for five years, but it was his uncle who became the first mayor of Idyllwild in 2012. So how did this furry friend become mayor?

"Six years ago, Idyllwild decided to elect its first mayor," Mueller said. "You had to be a local resident, but you couldn't run yourself, you could run your pet. In a voted election, 14 dogs and two cats ran and we decided to have an election to raise money for the animal rescue. So you paid $1 a vote and you were encouraged to vote a lot."

Max is not only the Mayor of Idyllwild, he also has a of couple tricks under his sleeve that he performs on command.

Mayor Max and his deputies, who are also golden retrievers, go to fundraisers and events all year round.