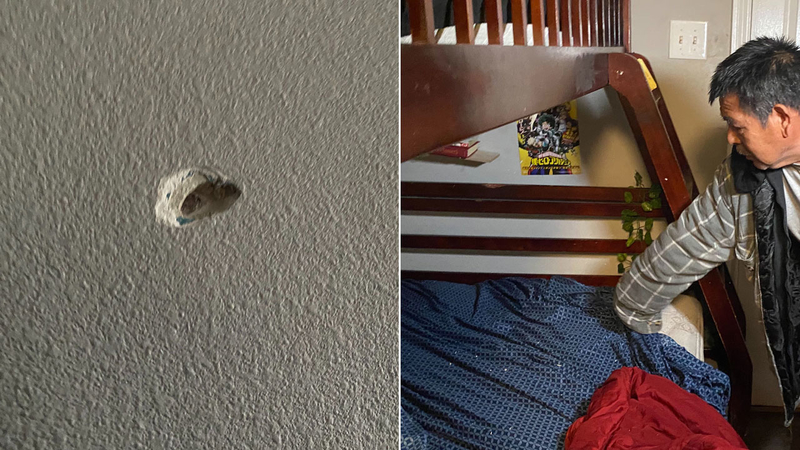 HOUSTON, Texas (KTRK) -- An 11-year-old girl was grazed by a bullet to her left ear while she slept early Friday morning in southeast Houston. The bullet was one of at least a dozen to hit her grandparents' home.

The Houston Police Department said shots were fired in the 1800 block of Ahrens Street, which is located near Highway 3 and Howard Drive, at about 2:20 a.m.

"Yeah, the bullet went right there, seven or eight shots," said grandfather Jose Govea, who showed ABC13 around his small home which was doused with bullets.

"She was asleep over here," he said, motioning to a lower bunk in a room she shared with two other granddaughters.

Govea says his grandchildren, an adult son and adult daughter, as well as his wife, were all home and sleeping at the time of the shooting. The little girl was taken to the hospital, treated and released. Meanwhile, another bullet, still hot, rolled down his wife's arm. She suffered some minor burns, but did not need medical treatment.

"It's bad, you know, when they come and mess with your kids," said Govea.

ABC13 saw bullet holes in two bedrooms, a living room and the kitchen. One bullet hit the wood post of a plunger on the patio, then went through the living room wall.

Govea says he believes people who knew his adult son are responsible, but he's just glad nobody else was hurt.

"I have a son. He doesn't have good friends. I think someone out of his friends, they come and do it," Govea said.

Police urge anyone with information in this case to contact the HPD Major Assaults & Family Violence Division at 713-308-8800 or Crime Stoppers at 713-222-TIPS.

A day after a baby died in a shooting, reportedly at the hands of a 3-year-old who got a hold of a gun, Mayor Sylvester Turner sent a message to both Houston parents and people who go out into the city.