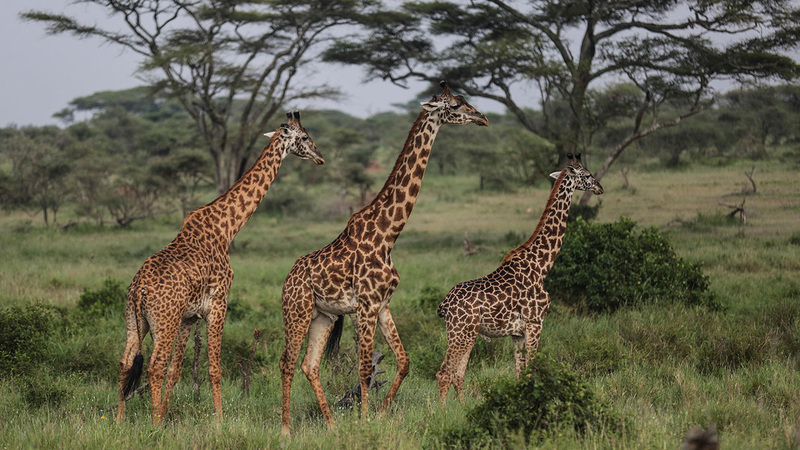 Giraffes one step closer to being named endangered species

The U.S. Fish and Wildlife Service announced Thursday that it had completed its initial review of a petition to list giraffes as an endangered or threatened species, finding that "existing regulatory mechanisms may be inadequate" and "listing may be warranted" pending a second, more in-depth review.

Agriculture, mining, poaching, disease, recreational hunting and genetic isolation are some of the threats giraffes face in the wild, according to the agency's review.

The International Union for the Conservation of Nature, an international organization not associated with the Fish and Wildlife Service, already considers giraffes to be a vulnerable species, one designation away from endangered. That organization estimates that there are less than 70,000 adult giraffes left in the wild in various populations spread across nearly two dozen countries in central and southern Africa.

Giraffe populations around the continent have dropped as much as 40% since 1985, according to IUCN data. The organization has identified four main threats to giraffes: habitat loss caused by deforestation and human population growth, civil unrest, poaching and ecological changes.

The Fish & Wildlife Service will also move forward with further review of potential protections for the Arizona eryngo, a wildflower found in parts of Arizona and Mexico. The San Gabriel chestnut snail and Refugio manzanita, a shrub species found in California, were also reviewed but will not receive any further consideration.

Researchers are keeping their eye on a 1,668-pound great white shark as she makes a rather unusual journey through the northern Gulf of Mexico with the hope that her travels will help scientists better understand how sharks move through the oceans.