Getting into the Oscar spirit with nominees of 'Get Out,' Daniel Kaluuya and Jordan Peele 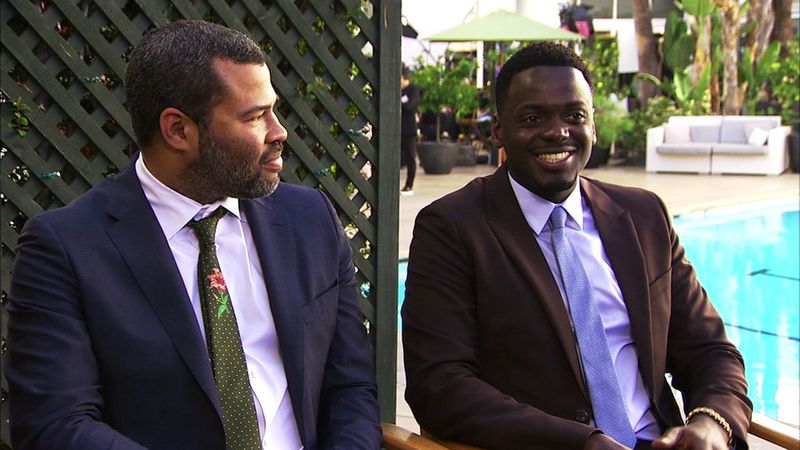 Jordan Peele, Daniel Kaluuya of 'Get Out' prepare for Oscars

LOS ANGELES -- The horror-thriller "Get Out" was released in February 2017, but Oscar voters did not forget it and even with the onslaught of so many late in the year releases, "Get Out's" star Daniel Kaluuya is nominated for best actor.

But that isn't the only honor the movie got. Creator Jordan Peele has three chances to take home Oscar gold. His categories are best director, best original screenplay, and, as a producer, best picture.

The two newcomers said they felt the love and acceptance of the Hollywood community when they recently attended the annual Oscar nominee's luncheon.

"I sat down, I was like oh wow, I'm nominated for an Oscar!" Kaluuya said. "It really sunk in, seeing like Christopher Nolan, and (Steven) Spielberg, and Guillermo (del Toro). Like wow! It's a pretty surreal ride."

"The whole thing is set up like a competition, but you know, at this point, everybody in this experience, we're fans of each other's work," Peele said. "We're honored to be in this space with one another. And the best part about this is meeting these heroes, meeting these icons, meeting these people that you just love their work."

It's all about teamwork for these two friends. They bonded while filming "Get Out."

"That's my guy!" Kaluuya said. "It's love. It's real. It's trust. And that's rare. There are certain scenes when it was like, I looked into Jordan's eyes and go, 'I trust you!' and that's invaluable."

Peele joked that Kaluuya won't be able to say no to another movie.

"Really, the best part for me is that he can never turn me down for a movie," Peele said jokingly. "I got him. I got his number!"
Report a correction or typo
Related topics:
arts & entertainmentcelebrityoscarsaward showsmoviemovie newshollywood wrap
Copyright © 2022 KTRK-TV. All Rights Reserved.
TOP STORIES
Manhunt underway for woman connected to deadly love triangle
Trial continues for man charged in Spring couple's 2018 murder
Houston Congressman Al Green tests positive for COVID-19
Authorities searching for 49-year-old Alvin man last seen May 19
Houston gets extra 'rose' after paying $240k to bring Bachelor to town
City of Houston to announce website for all Juneteenth events
Rain chances continue into the work week
Show More
More than 75,000 pounds of baby formula lands in US amid shortage
Arby's is selling a fast-food staple it's never offered before
'I fought': Trevor Reed describes his survival in a Russian prison
Quiet in the tropics for now
Report: Top Southern Baptists stonewalled sex abuse victims
More TOP STORIES News