BERLIN, Germany -- Berlin police have raised the death toll to 12 after a truck rammed into a Christmas market in the German capital.

The police statement on Twitter also says 48 people were injured, some of them seriously, and taken to hospitals.

Authorities had previously said that at least nine people were killed.

The popular Christmas market outside the Kaiser Wilhelm Memorial Church was filled with a mix of tourists and locals when the large Scania truck hurtled into it. German officials said they were investigating what caused the crash, but the White House condemned "what appears to have been a terrorist attack."


Mike Fox, a tourist from Birmingham, England, told The Associated Press at the scene that the truck missed him by about three meters (yards).

"It was definitely deliberate," Fox said. He said he helped people who appeared to have broken limbs, and that others were trapped under Christmas stands.

NYPD boosts security following Berlin incident
There's no specific threat in NYC stemming from the incident in Berlin, but as a precaution, the NYPD is moving heavily armed Critical Response Command officers toward these displays.

The truck came to a halt on a sidewalk on one side of the market, shortly after ramming a large stand called "Fascination Christmas," ripping off one side and knocking down a large Christmas tree. The three-meter tree lay in the street, red and gold ornamental balls still attached to its limbs and a golden star at the top.

In Washington, White House National Security Council spokesman Ned Price said the United States has already been in contact with German officials and stands ready to assist in the investigation and response.

The crash came less than a month after the U.S. State Department called for caution in markets and other public places across Europe, saying extremist groups including Islamic State and al-Qaida were focusing "on the upcoming holiday season and associated events."

The Islamic State group and al-Qaida have both called on followers to use trucks in particular to attack crowds. On July 14, a truck plowed into Bastille Day revelers in the southern French city of Nice, killing 86 people. Islamic State claimed responsibility for that attack, which was carried out by a Tunisian living in France.

Near the market, dozens of ambulances lined the streets waiting to evacuate people, and heavily armed police patrolled the area. Police on Twitter urged people to stay away from the area, saying they need to keep the streets clear for rescue vehicles.

Among the dead was a passenger in the truck, who succumbed as paramedics treated him, Berlin police spokesman Winfried Wenzel said. He offered no further details.

A suspect believed to be the driver was picked up about 2 kilometers (1 miles) away, near Berlin's Victory Column monument. He was being interrogated, Wenzel said. Wenzel said the truck was registered in Poland, but that police were still investigating the identity of the driver. He did not give the men's nationalities.

The Polish owner of the truck said he feared the vehicle, driven by his cousin, may have been hijacked. Ariel Zurawki said he last spoke with the driver around noon, and the driver told him he was in Berlin and scheduled to unload Tuesday morning.

"They must have done something to my driver," he told TVN24.

Federal prosecutors, who handle terrorism cases, took over the investigation, according to German Justice Minister Heiko Maas. But Berlin's top security official, state interior minister Andreas Geisel, told RBB television that it was too early to say whether it was an attack, and called reports that the truck may have been hijacked "pure speculation."

Even so, some politicians were pointing fingers. Marcus Pretzell, a prominent member of the anti-migration Alternative for Germany party, lashed out at the government of Chancellor Angela Merkel, saying on Twitter: "When will the German state of law strike back? When will this cursed hypocrisy finally stop? These are Merkel's dead! #Nice #Berlin."

Germany has not experienced any mass-casualty attacks by Islamic extremists, but has been increasingly wary since two attacks by asylum-seekers in the summer that were claimed by the Islamic State group. Five people were wounded in an ax rampage on a train near Wuerzburg and 15 in a bombing outside a bar in Ansbach. Both attackers were killed.

Those attacks, and two others unrelated to Islamic extremism in the same weeklong period, helped stoke tensions in Germany over the arrival last year of 890,000 migrants.

US citizens in #Berlin - contact family/friends to let them know you are safe, following reports of truck crash at Christmas Market.

Police spokesman Winfried Wenzel told ZDF public television that the suspect was arrested nearby, but offered no further details.
SEE ALSO:
Carnage on the road: Truck attack kills 84 in France 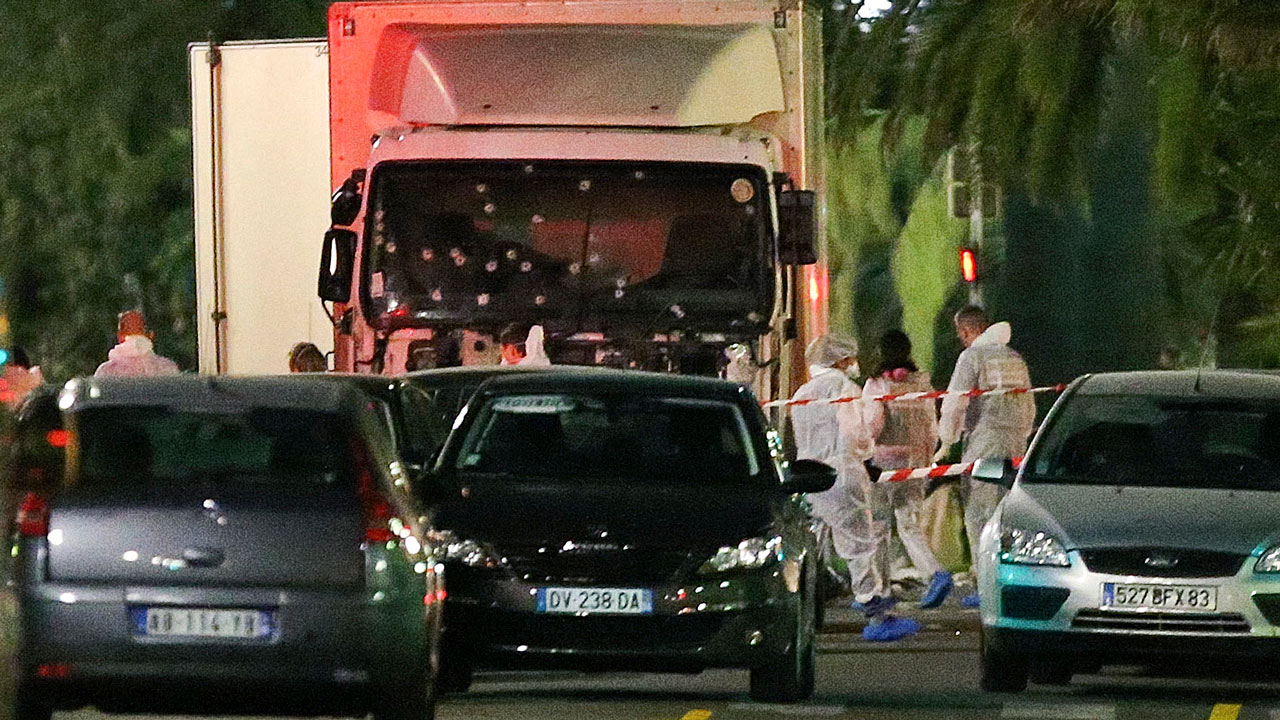