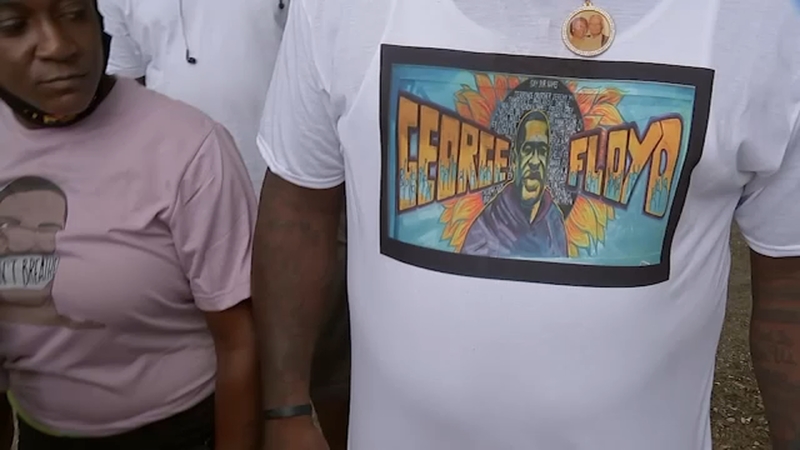 HOUSTON, Texas (KTRK) -- George Floyd will be laid to rest next Tuesday in Houston where he grew up, but for Floyd's closest friends, the only place to remember him is in the heart of Houston's historic Third Ward.

"This is where George Floyd comes from," said long-time friend, Eddy Barlow.

READ MORE: Why is George Floyd being buried in Houston?

Both Barlow and Floyd played basketball at nearby Yates High School. Barlow would go on to play professionally in several European leagues before returning to Houston.

Cal Wayne is another long-time friend.

As a Houston rapper, Wayne featured Floyd in many of his music videos, focusing on their life experiences growing up in the Third Ward.

"He really was a good dude," said Wayne. "He stands for God. He was a big teddy bear."

Wayne and another childhood friend, 'Poboy,' will now be pallbearers at Floyd's funeral.

"This is Floyd Lane right here," said Poboy, gesturing to the street corner where Floyd's friends gather daily. "In the projects, everyone (sticks) together."

Floyd will be remembered at three different events. On Thursday, a memorial service will be held in Minneapolis. On Saturday, a service will be held in North Carolina where Floyd was born. Next week, there will be a visitation in Houston on Monday, followed by a funeral on Tuesday.
Report a correction or typo
Related topics:
societyhoustonblack lives mattergeorge floydafrican americansu.s. & worldpolice brutality
Copyright © 2022 KTRK-TV. All Rights Reserved.
GEORGE FLOYD
Defense: Chauvin called 'all of the shots' when Floyd killed
Jury selection begins in federal trial over George Floyd's death
Judge agrees to delay trial for 3 former cops in Floyd death
HPD unaware girl was headed to hospital when they arrived, chief says
TOP STORIES
HPD searches for man out on bond in K-9 stabbing after dad disappears
3-year-old injured in deadly chase with deputy on life support
51-year-old suspect in corporal's ambush killing on the run
Drying out, but staying cool this week
Klein HS to becomes first Space Force JROTC in Texas today
Cause of death revealed for 23-year-old woman found dead after date
Mom shares story of son's 'scary' battle with COVID complications
Show More
Sergeant was to walk daughter down aisle until his hit-and-run death
Omicron-specific COVID-19 vaccine starts clinical trials
COVID-19 vaccines do not affect fertility, study finds
H-E-B's Scott McClelland retirement and what's next
US orders 8,500 troops on heightened alert amid Russia concerns
More TOP STORIES News