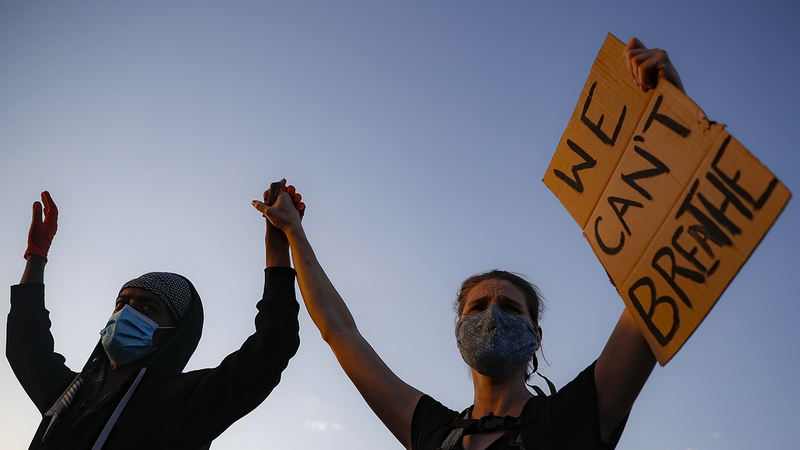 Police around the nation and law enforcement experts on Thursday broadly condemned the way George Floyd, who died in Minneapolis police custody this week, was restrained by an officer who dug his knee into the man's neck, saying no circumstances warrant such a dangerous technique.

Deeply disturbing video shot by a bystander shows Floyd handcuffed, lying on his stomach and seemingly subdued as the officer trying to arrest him pressed his knee down on Floyd's neck for nearly eight minutes.

Some police officials and experts said equally shocking was something not seen in the video: Other officers on the scene apparently did not try to intervene even as Floyd repeatedly cried out that he couldn't breathe and moaned in pain.

"Any officer who abuses their power or stands by and allows it to happen does not deserve to wear the badge, period," Chicago Police Superintendent David O. Brown said.

Floyd, 46, was arrested Monday after an employee at a grocery store called police to accuse him of trying to pass a counterfeit $20 bill. The cellphone video shows Floyd, who is black, face-down on the ground with his hands cuffed behind his back, as officer Derek Chauvin, who is white, uses the knee restraint on his neck.

Floyd's head is turned to the side and he does not appear to be resisting. As the minutes tick by and Chauvin continues to hold him down, Floyd's complaints about not being able to breathe stop as he falls silent and motionless. Toward the end of the video, paramedics arrive, lift a limp Floyd onto a stretcher and place him in an ambulance.

"He wasn't actively resisting, and he was saying he couldn't breathe," said Charles P. Stephenson, a former police officer and FBI agent with expertise in use-of-force tactics. "You have to understand that possibility is there (that Floyd couldn't breathe), and you release any kind of restriction you might have on an airway immediately."

Chauvin and the three other responding officers have been fired, and the FBI is investigating whether they willfully deprived Floyd of his civil rights. Chauvin has not spoken publicly, and his attorney has not responded to calls seeking comment.

Police recruits learn a variety of use-of-force techniques at the academy, all with the idea that any force employed may equal but not exceed the physical resistance offered by a suspect.

One technique is to restrain someone on the ground face-down, but officers are taught to press a part of the lower leg, such as the shin or top of the ankle, across the shoulders or the back. In some cases officers will "hog-tie" suspects' legs to prevent flight or violent resistance.

But "no police academy that we know of teaches a police officer to use their knee, to put it on their neck," said Chuck Wexler, executive director of the Police Executive Research Forum, which researches and advises on police practices. "That's just not taught because that can impact their breathing and their carotid artery (a crucial vessel that supplies blood to the brain). So when police look at that video, they are shocked that those tactics were used."

What's more, officers are taught to get a suspect up from the ground as soon as possible, either sitting or standing, since lying on one's stomach can cause breathing problems, especially for larger people.

"If what we saw was a continuing, ongoing fight, I could see how a leg, for example, could slip to the back of the neck. But this is not what I'm seeing," said John Bostain, a former officer and president of Command Presence, which trains police around the country. "I'm seeing a fight that appears to be over."

Floyd's case and the recent shooting death of Ahmaud Arbery in Georgia have once again laid bare the divide between minority communities and law enforcement that grew to a nationwide uproar following the officer killings of Eric Garner and Michael Brown in 2014 and the death of Freddie Gray in police custody in 2015, among others. Videos from bystanders and police cameras have helped elevate such cases to national scrutiny.

Law enforcement officials often ask that people reserve judgment in such cases until all facts - what transpired before or after what a video shows - are known. But the Floyd case has drawn swift and widespread condemnation.

The Fraternal Order of Police, for example, issued a statement saying in part: "The fact that he was a suspect in custody is immaterial - police officers should at all times render aid to those who need it. Police officers need to treat all of our citizens with respect and understanding and should be held to the very highest standards for their conduct."

Law enforcement experts say tempers can flare when a suspect resists arrest, but it's incumbent upon fellow officers with cooler heads to defuse the situation and put a stop to excessive force.

But there's no sign from the video that any of the officers at the scene with Chauvin tried to intervene. For some that had chilling echoes of the police beating of Rodney King in Los Angeles in 1991 despite the presence of a supervising officer.

"That bothered me greatly," said Stephenson, the use-of-force expert. "They all have an affirmative duty and obligation to uphold the law and uphold the procedures and to stop any violation of law or excessive use of force that they're a witness to. ... It didn't look like those officers were making any effort to go over or say something or do anything."
Report a correction or typo
Related topics:
george floydu.s. & worldpolice officer
Copyright © 2021 KTRK-TV. All Rights Reserved.
GEORGE FLOYD
Teen who filmed George Floyd's murder says uncle died in police crash
Activist organizes one of Chicago's largest peaceful protests
Floyd's family on 22 1/2-year sentence: 'It's a slap in the face'
Judge sentences Derek Chauvin to 22.5 years in prison
TOP STORIES
Houston health care leaders sound alarm on spike in COVID-19 cases
7-year-old released from hospital after bullet hit her while she slept
1 shot, 1 stabbed at Houston Community College campus, HPD says
Hot and hazy weekend ahead but more rain expected next week
Imprisoned 'Dating Game Killer' Rodney Alcala, 77, dies in California
Sleeping 7-year-old hit by bullet in NE Harris Co. drive-by shooting
US-59 feeder at Crabb River Rd. back open after fatal crash Saturday
Show More
Vaccines are 'personal decision,' Hillsong Church founder says
Texas A&M System Board of Regents to meet on 'SEC issues'
$1.5 million in bonds set for HFD ambulance hijacking suspect
Comedian Jackie Mason dies at 93
60% chance of development along the eastern seaboard
More TOP STORIES News