Dozens killed in Gaza as US Embassy opens in Jerusalem 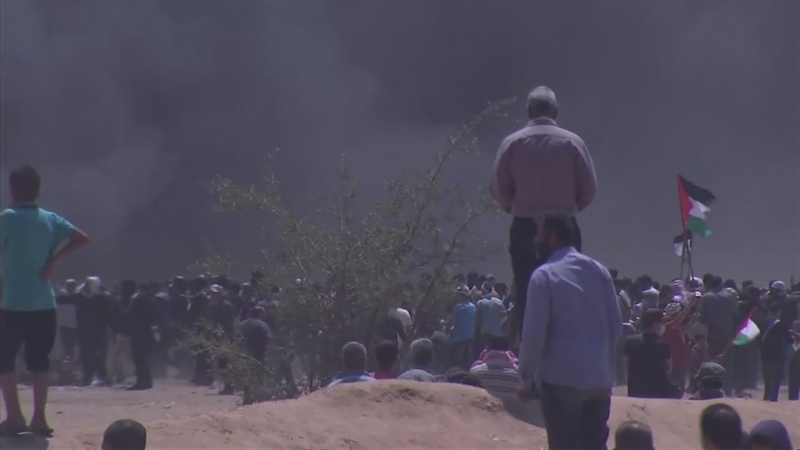 GAZA CITY, Gaza Strip -- Israeli soldiers shot and killed at least 41 Palestinians during mass protests along the Gaza border on Monday. It was the deadliest day there since a devastating 2014 cross-border war and cast a pall over Israel's festive inauguration of the new U.S. Embassy in contested Jerusalem.

In a show of anger fueled by the embassy move, protesters set tires on fire, sending plumes of black smoke into the air, and hurled firebombs and stones toward Israeli troops across the border. The Israeli military said its troops had come under fire, and accused protesters of trying to break through the border fence. It said troops shot and killed three Palestinians who were trying to plant a bomb.

The steadily climbing death toll and wall-to-wall condemnation of the embassy move by the Arab world raised new doubts about President Donald Trump's ambitions to broker what he once said would be the Mideast "deal of the century."

By midafternoon, at least 41 Palestinians, including five minors, were killed, the Gaza Health Ministry said. One of the minors was identified as a girl.

At least 772 protesters were wounded, including 86 in serious or critical condition.

At the same time, just 70 kilometers (45 miles) away in Jerusalem, the opening ceremony of the embassy got under way.

"Today we open the United States embassy in Jerusalem Israel," he said to warm applause.

The new embassy will temporarily operate from an existing U.S. consulate, until a decision has been made on a permanent location.

In Gaza, the Hamas-led protest was meant to be the biggest yet in a weeks-long campaign against a decade-old blockade of the territory. The Israeli military estimated a turnout of about 40,000, saying this fell short of what Hamas had hoped for.

The march was also directed at the inauguration of the embassy.

Moving the embassy from Tel Aviv to Jerusalem - a key Trump campaign promise - infuriated the Palestinians, who seek east Jerusalem as a future capital.

Monday marked the biggest showdown in years between Israel's military and Gaza's Hamas rulers along the volatile border. The sides have largely observed a cease-fire since the 2014 war - their third in a decade.

The protests mark the culmination of a campaign, led by Hamas and fueled by despair among Gaza's 2 million people, to break the blockade of the territory imposed by Israel and Egypt after Hamas seized control of Gaza in 2007. Since weekly border marches began in late March, 83 Palestinian protesters have been killed and more than 2,500 wounded by Israeli army fire. Hamas said four members, including three security men, were among the dead Monday.

Ismail Radwan, a senior Hamas figure, said the mass border protests against Israel will continue "until the rights of the Palestinian people are achieved."

"Moving the U.S. Embassy to Jerusalem will be a disaster on the American administration and a black day in the history of the American people because they are partners with the occupation and its aggression against the Palestinian people," he added.

Hamas leaders have suggested a border breach is possible Monday, something Israel has vowed to prevent at any cost.

Most of the casualties were in the southern Gaza towns of Khan Younis and Rafah. Israeli forces were firing volleys of tear gas to disperse the crowds, and the sound of heavy gunfire could be heard. Sirens were constantly wailing as the wounded were carried to nearby ambulances. Groups of young activists repeatedly approached the fence, but were quickly scattered by gunfire and tear gas.

Lt. Col. Jonathan Conricus, an Israeli military spokesman, said the army had set up additional "layers" of security in and around communities near the border to defend Israeli civilians. He said there already had been several "significant attempts" to break through the fence.

"Even if the fence is breached, we will be able to protect Israeli civilians from attempts to massacre or kidnap or kill them," he said.

In a statement, the army said troops had shot and killed three Palestinians who attempted to plant a bomb along the fence. It also said an aircraft had targeted a Hamas post in northern Gaza after Israeli troops came under fire.

The timing of Monday's events was deeply symbolic, both to Israel and the Palestinians.

The U.S. said it chose the date to coincide with the 70th anniversary of Israel's establishment.

But it also marks the anniversary of what Palestinians call their "nakba," or catastrophe, a reference to the uprooting of hundreds of thousands who fled or were expelled from present-day Israel during the 1948 war surrounding Israel's creation.

A majority of Gaza's 2 million people are descendants of refugees, and the protests have been billed as the "Great March of Return" to long-lost homes in what is now Israel.

In one of the border areas east of Gaza City, Mohammed Hamami, a 40-year-old civil servant, joined a crowd of hundreds of protesters, along with his mother and five children.

"Today we are here to send a message to Israel and its allies that we will never give up on our land," he said.

Some protesters moved to within about 150 meters (yards) of the border fence. A reporter saw two men who tried to advance further being shot in the legs by Israeli troops.

Clouds of black smoke from burning tires rose into the air. Earlier Monday, Israeli drones dropping incendiary material had pre-emptively set ablaze some of the tires collected by activists.

Protesters have used the thick smoke as cover against Israeli snipers perched on high sand berms on the other side of the border. The army accuses Hamas of using the protests as cover to plan or carry out attacks.

Trump's decision to move the American embassy from Tel Aviv to Jerusalem was welcomed by Israel and condemned by the Palestinians.

Israel captured east Jerusalem in the 1967 Mideast war and annexed it in a move not recognized by the international community. The Palestinians seek the city's eastern half as the capital of a future state.

Saeb Erekat, a senior Abbas aide, said Monday that Trump had violated a promise to hold off on moving the embassy to give peace talks a chance and that his administration is "based on lies."

Erekat said the Trump administration has "become part of the problem, not part of the solution."

In the West Bank, several dozen Palestinian stone-throwers clashed with Israeli troops on the outskirts of Jerusalem, with no immediate reports of injuries. Earlier Monday, several thousand gathered in the West Bank city of Ramallah to protest the inauguration of the new embassy.

Although Trump has said his declaration does not set the final borders of the city, it is seen by both Israel and the Palestinians as taking Israel's side in the most sensitive issue in their conflict.

Only two countries, Guatemala and Paraguay, have said they will follow suit. Most of the world maintains embassies in Tel Aviv, saying the Jerusalem issue must first be resolved.

In a reflection of the deep sensitivities, dozens of countries - including Britain, France and Germany - skipped a celebration Sunday night at the Israeli Foreign Ministry.