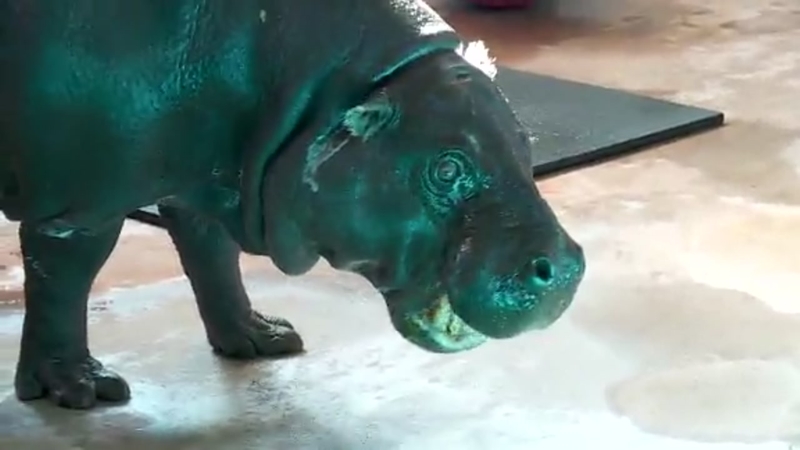 OKLAHOMA CITY, Oklahoma -- Gayla Peevey had a big song on her hands when she was only 10 years old.

"I Want a Hippopotamus for Christmas" blew up as soon as it was released on Columbia Records.

Peevey lived in Oklahoma City when the song came out in 1953.

"I had no idea that 64 years after that record came out that it would still be going. In fact, stronger than ever. It's had a resurgence," Peevey told KFOR.

The Oklahoma City Zoo and The Oklahoman started a fundraiser to get Peevey that hippo she wanted.

"They started a campaign that would raise money to buy Gayla a hippo and, of course, the arrangement was for her to then donate the hippo to the zoo, which is what happened," Amy Stephens, with the Oklahoma City Zoo, said.

Little Matilda showed up just in time for Christmas, and Peevey was able to meet her new friend at the airport.

"And I love one of the quotes Gayla said at the time. She said, 'Looks like she's all mouth to me," Stephens said.

Matilda was a huge present for her and the entire Oklahoma City community for the next 50 years.

Now, Peevey lives in California but she plans to come back to the Oklahoma City Zoo for a sing-a-long on Saturday, which has been declared 'Gayla Peevey Day.'

"It almost brings tears to my eyes because I really feel so welcomed and loved and the history that I have in Oklahoma and the Oklahoma City Zoo is such a treasure," Peevey said.

And when asked if she still wants a hippo for the holidays, she said, "It would be hard to outdo Matilda, but you never know."