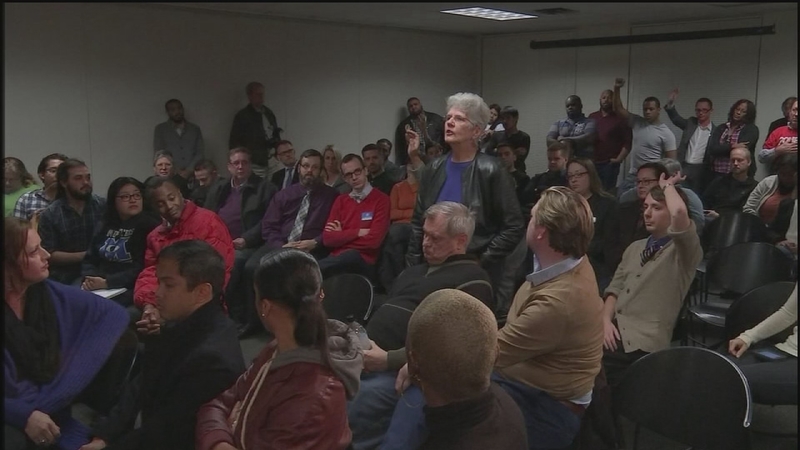 HOUSTON (KTRK) -- The date of Houston's 2015 Pride Parade has changed to June 27 after an uproar from some GLBT activists.

"You do not speak for me -- ever," said one woman at a meeting of about 100 at the Montrose Center Thursday night.

Her comments were directed at Pride Houston's Board, which, in an about-face, moved the Pride Houston festivities in an effort to avoid conflict with Juneteenth celebrations. At the meeting, the board members admitted they did not fully understand the significance of Juneteenth.

"If they didn't understand it then, they do now," said community activist Jolanda Jones.

Juneteenth is the oldest known celebration commemorating the end of slavery in the United States. It was the day when slaves in Texas learned of the Emancipation Proclamation, and their freedom was finally granted.

"I explained to them this happened two years after the Civil War ended and this was a big deal," said Ashton Woods, who spoke out weeks ago with other black GLBT activists. Woods said the Board dismissed his comments and denied requests to move the date of the Pride Parade.

"It's as important as Cinco de Mayo is to Hispanics," said Jones. "And I would never schedule anything to interfere with Cinco de Mayo celebrations."

The same board recently received harsh criticism about moving Houston's Pride Parade downtown from its home in Montrose. President Frankie Quijano said this date debacle is an innocent oversight and they are now moving forward.

"We decided to change it to June 27 so it wouldn't conflict and we could respect the African American community," said Quijano.

Houston's Pride celebration is traditionally held near the anniversary of the 1969 Stonewall Riots in New York, where gays unified and stood against police raids and brutality. Now, this crowd, and in particular black gays, want the board to heal the hurt that's wedged a divide between them, especially given their shared ongoing fight to keep the Houston Equal Rights Ordinance.