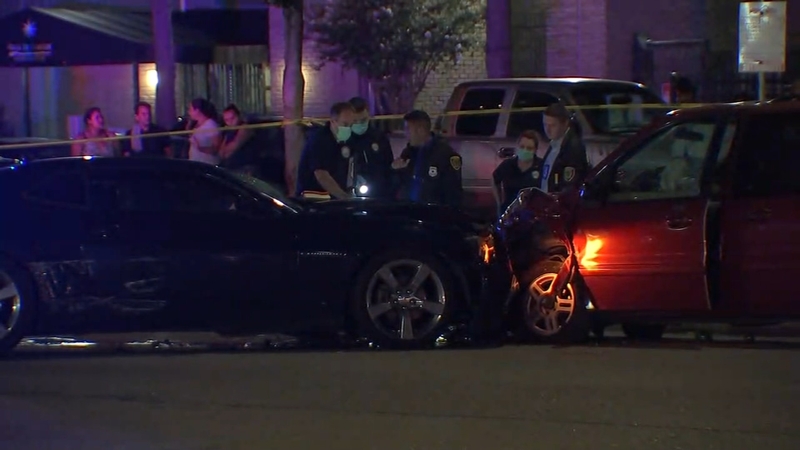 Man may lose legs after stopping robber from stealing car

HOUSTON, Texas (KTRK) -- A man may lose both of his legs after a bizarre robbery and crash in southwest Houston.

On Monday, Houston police say a man and his wife drove up to a gas station located in the 9500 block of Woodfair Drive around 8 p.m.

Police told ABC13 that while the husband, who was identified as 47-year-old Orlando Ballester-Perez, was inside the gas station, a man jumped into the driver's side of his vehicle with his wife still in the passenger seat.

The husband jumped on the hood of his car to prevent the suspect from driving off with his wife in the car, police said.

Authorities said the suspect started swerving the vehicle to throw the husband off, but crashed into a minivan, pinning the husband between both vehicles.

"I saw the guy on top of the hood. I guess he was trying to get him off the hood, and that's when he rammed his car into my car," Ventura said.

Officers applied tourniquets to the husband's legs until the paramedics arrived and transported him to the hospital.

Ventura went to the hospital to be checked out. He said he is sore.

Ballester-Perez is a maintenance worker at his apartment complex, where he's seen as a friendly face.

"He says hi to everybody, like, 'Hey, how is everybody doing?' He has a good personality, spirit, very happy and outgoing person," said April Jaramillo, who lives at the complex.

He was last seen wearing a white and black do-rag and shirt. He also has long dreadlocks.

If you have any information, call Crime Stoppers at 713-222-TIPS or submit your anonymous tip online at www.Crime-Stoppers.org. You could receive a reward of up to $5,000.