Abel Elias Acosta is considered armed and dangerous. Anyone who knows where he is should call police immediately.
AP 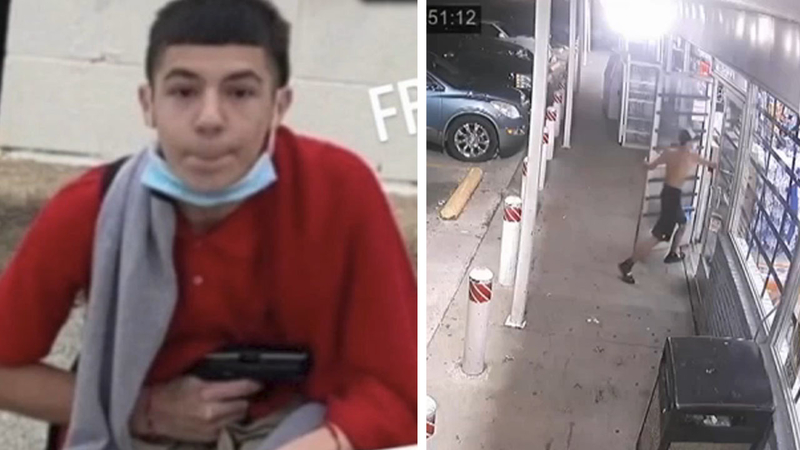 GARLAND, Texas -- Dallas-area police have charged a 14-year-old with capital murder in a triple killing at a gas station and are warning that the boy is at large, armed and dangerous.

Police in Garland are seeking Abel Elias Acosta and said Wednesday that they have evidence showing he was the gunman who left three teens dead and wounded a fourth at the suburban gas station's convenience store Sunday.

Acosta is the son of Richard Acosta, 33, who turned himself in to police Monday and is also charged with capital murder for allegedly acting as a get-away driver in the shooting, police said in a statement. A juvenile court has issued an order to take the younger Acosta into custody, police said, and authorized them to publicly release his name.

Prosecutors will determine whether the teen is charged as a minor or an adult, said Lt. Pedro Barineau.

The Associated Press does not typically name juveniles suspected of a crime but is doing so in this case because authorities said he is a threat to public safety. Police released a photo from social media Wednesday of a boy holding a gun who they said is Acosta.

Acosta is not the 14-year-old who Garland police arrested Monday as a suspect in the shooting and then released to his family the next day, said Barineau.

That teenager, who police have not identified by name, is not the shooter but remains a "person of interest" in the investigation, he said.

Police described the younger Acosta as a light-skinned Hispanic boy with dark hair and brown eyes. He is about 5 feet, 5 inches tall and about 125 lbs., they said.

The shooting was captured on surveillance video. It shows a shirtless boy or man with a handgun approaching the gas station store while crouched. He swings open the door and starts shooting from the doorway.

Police previously said the shooter fired more than 20 rounds from a .40-caliber pistol before fleeing in the Dodge Ram pickup driven by Richard Acosta, who they said also brought the gunman to the gas station.

Those killed were 14-year-old Xavier Gonazalez, 16-year-old Ivan Noyala, and 17-year-old Rafael Garcia, according to police. A 15-year-old who was a cook at the store was taken to the hospital following the shooting and was expected to survive.

Investigators believe the shooting was a retaliatory attack on one or more of the people in the store, Barineau said.