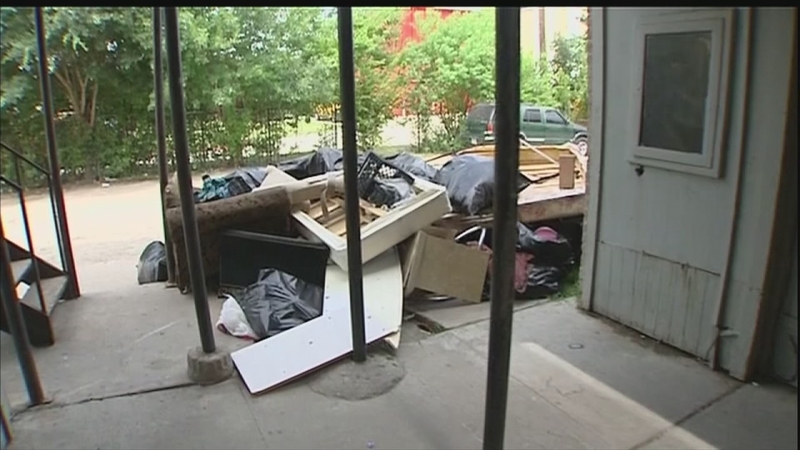 HOUSTON (KTRK) -- For years, La Promenade apartments had been synonymous with gangs and crime -- enough that the Sharpstown Management District convinced the county attorney's office to file an injunction against the gangs that inhabited the sprawling, deteriorating complex.

Times have changed, including the name. It is now the Gardens at Bissonnet, and it has a new owner.

Developer/investor Steve Moore has turned around more than a dozen distressed apartments around Houston, including several in the Greenspoint area. They went from high crime complexes to safe places for low-income families to live.

As is his custom, the former professor and self-described science geek takes up residence in the places he rehabs. His new home in the Gardens includes walls with gaping holes, a sink filled with dirty dishes left by the previous tenant and piles of discarded clothes.

Moore took over this property 12 days ago. Since then, the parking lot dotted with potholes has been repaved; flowers and sod planted, and more than a ton of tossed-out furniture and belongings have been set out by dumpsters.

Crime has already decreased since the county injunction -- down by more than 50 percent since three years ago.

"If I was your average slum lord, I could make money at this," Moore says. "But I'm not a slum lord."

He bought a majority interest in what's technically a condominium project. That distinction allowed it to fly under some code requirements. On top of that, Moore is loaning a half million dollars to the condo association to make much needed upgrades in security and exterior repairs.

The Sharpstown Management District sought out Moore, at its wit's end on how to either eliminate an eyesore or transform it. Moore accepted the challenge.

Even as we were there, private security ordered a man sleeping on a concrete slab inside the complex to get off the property. He did.

Moore says he does it not for the money, but the happiness he feels when he sees lives changing, because of a decent place to live.