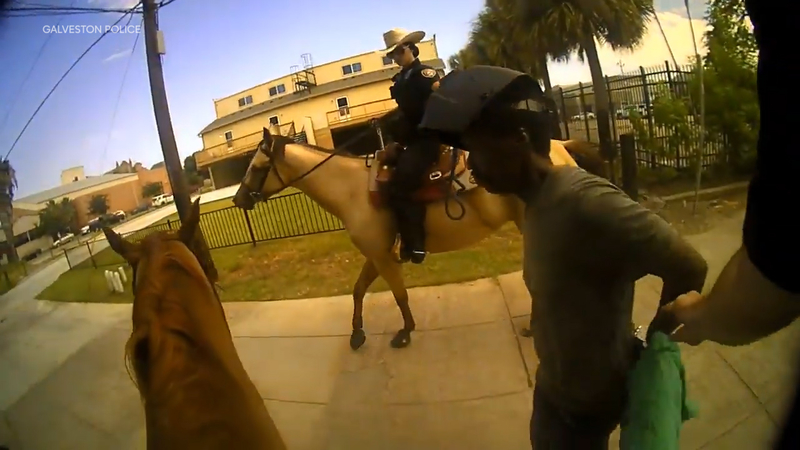 GALVESTON, Texas (KTRK) -- After public outcry over the arrest of a handcuffed man led by officers on horseback, Galveston police have released the full arrest bodycam video.

Donald Neely was arrested in August for criminal trespassing. A photo was captured at the time showing Neely being led by two mounted officers on horseback for six blocks.

He was arrested in the 600 block of 23rd Street and walked to 21st and Market. People took pictures and video, and the images have been compared to those from the dark days of slavery.

It appears the officers involved were aware at the time of how it would appear to the public. One could be heard saying, "This is going to to look really bad."

Galveston PD released two bodycam videos of an arrest involving a man in handcuffs being led by officers on horseback | This is the camera from Ofc. Brosch.

Galveston PD released two bodycam videos of an arrest involving a man in handcuffs being led by officers on horseback | This is the camera from Ofc. Smith.

"I appreciate the efforts of Sheriff Henry Trochesset and thank the Galveston County Sheriff's Office for taking the time to perform a thorough, independent review of the arrest. I am studying the report now and will use its findings to make decisions in the near future about the next steps for the department," Police Chief Vernon Hale said.

The Texas Rangers conducted an inquiry into the arrest and concluded that they found no evidence that would warrant a criminal investigation.

Attorneys for Neely's family fought for weeks for the release of body camera video from the arrest. The Galveston city manager and the Galveston police chief announced video of the arrest would not be released until the Texas Rangers' investigation was complete.

Protesters say Donald Neely was dehumanized and though a request to see body cam footage hasn't been granted, they continue to call for justice.

"Galveston voters elected to have civil service rules for their public safety officers. Due to civil service rules, any discipline would be at the sole discretion of Chief Hale. The city supports the chief in any actions he deems to be appropriate; however, if the investigation identifies deficiencies in department policies or practices those will be addressed directly with the Chief," said City Manager Brian Maxwell.

"First and foremost I must apologize to Mister Neely for this unnecessary embarrassment," the police chief said in a statement on the arrest.