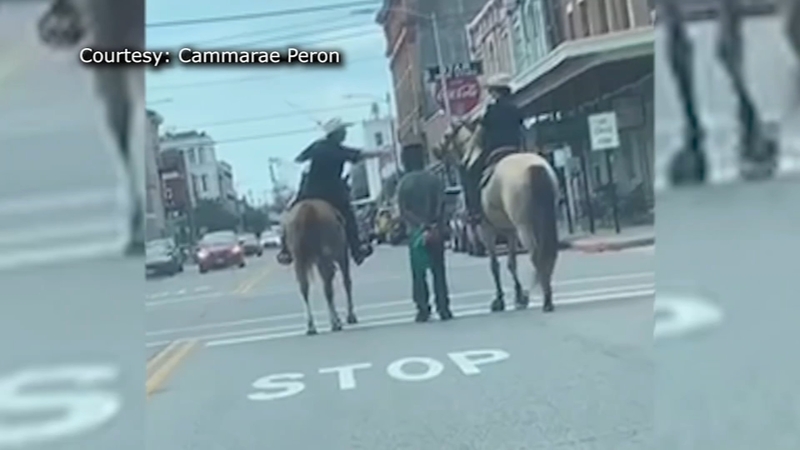 GALVESTON, Texas (KTRK) -- The head of the Galveston police union is defending the officers who led a man in handcuffs by a rope.

The photo of two Galveston police officers on horseback with Donald Neely has sparked outrage.

Geoffrey Gainer, the president of the Galveston Municipal Police Officers Association and a Galveston police officer himself, says they were just doing what they were trained to do.

"If there's a failure here, it a failure of policy and training," Gainer said.

The two officers and the department have been widely criticized. Gainer says Patrick Brosch, the officer seen in the viral photo, is an advocate for the mentally ill, like Neely.

As Galveston's police chief was addressing the community Tuesday night and listening to the criticism, Gainer says Brosch highlighted one of the chief's points.

"Of all of the hateful things said in that meeting, the one thing he said to me, the only thing he said was, 'Did you hear what the chief said about making mental health a priority? I think it's a good time to push for mental health-trained officers on every watch,'" Gainer recalled.

Neely, his handcuffs attached to a rope, was led by the officers on horseback for six blocks last Saturday, according to the police report obtained by Eyewitness News, not the block or so the Galveston Police Department first reported.

Chief Vernon Hale has taken responsibility and says the technique will no longer be used.

The officers do not face discipline.

Neely told his sister he was treated well. The union president knows the optics are bad, but the officers he says are far from it.

"We all agree we didn't see it coming. We didn't know we'd need to account for this, and now we do, and this is how better policies are made."

"It's not the way the officer is trained," Acevedo said. "It's not our policy. They're not trained that way. If other departments across the country, bad news spreads better than good news, I can almost assure that just about every department will, if they're smart, be changing that if that's their training."

Eyewitness News did check to see if the incident is forcing other agencies to change policy.

Harris County Sheriff's Office said it's working on its mounted patrol policy, but won't include this type of transport tactic when it's finalized.

A community meeting is scheduled for Thursday at 6 p.m.at the Rosenberg Library in Galveston.