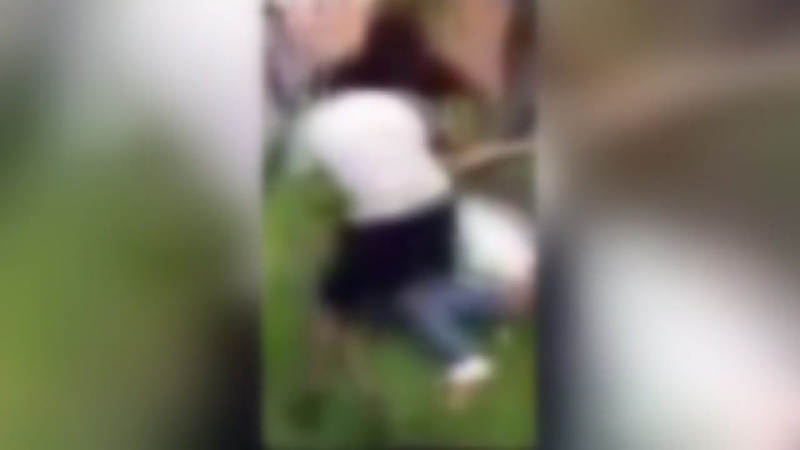 GALVESTON, Texas (KTRK) -- Security measures have been ramped up at Galveston's Ball High School after a school fight broke out involving a large group of students.

Eyewitness News has learned at least eight students have been identified as being part of a mass brawl, all targeting a young couple.

"It was horrific. It was the most horrible thing that I have ever seen my child have to go through and it was like... I'm sorry," said the mother of one of the victims, a 16-year-old male.

The brawl was caught on many cell phone cameras which are helping Galveston ISD Police identify the students involved.

GISD says it happened just outside the front doors of the school on Thursday during dismissal.

"He has a lot of knots and bruises on his head, a bunch on his head he got hit from behind a lot," said the male victim's father.

Both parents say their son was attacked after school because he stood up for his girlfriend who was sexually harassed a week ago.

During the school fight, they say the girlfriend was also injured.

"She was punched in the face a couple times and they grabbed her by her hair and pulled her down as well," said the boyfriend's father.

Galveston ISD sent out this statement:

On September 6, 2018, at approximately 4:00 pm, a fight broke out between students on the Ball High School campus. BHS administrators and Galveston ISD Police Department quickly responded and stopped the fight.

All culprits involved have been identified and are in the process of being addressed by both the administration and the GISD Police Department.

"The safety of our students will continue to remain our highest priority. Situations such as yesterday's student altercation was unacceptable and will not be tolerated," stated BHS Principal, Joseph Pillar.

GISD does not tolerate physical aggression, fighting or any threatening behavior towards a district student or employee and the students involved will be held accountable. If you have any additional information regarding the altercation, please email the BHS Principal, Joseph Pillar, at josephpillar@gisd.org.

In addition, we strongly encourage anyone to report concerns immediately to Galveston ISD Police Department directly at 409-766-5825, or you can a report a tip on GISD website at www.gisd.org/tipline or through the GISD App.

Both parents Eyewitness News spoke with say they are happy with the quick action by the school administration and police, but hope charges are filed against the students who left their son injured.

GISD says they have added four security officers to their police force this year, stemming from the deadly shooting at Santa Fe High School in May.

The district spokesperson, Dyann Polzin says because of the fight they are also now working with Galveston Police to patrol the campus and increase police presence until further notice.