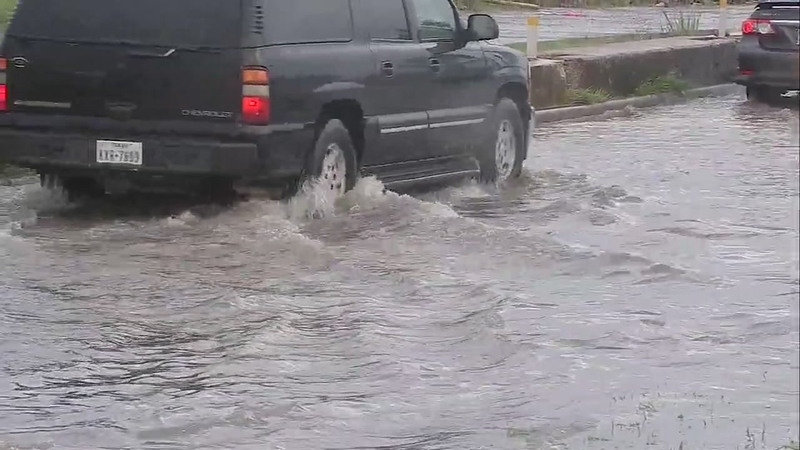 DICKINSON, Texas (KTRK) -- After dealing with flash flooding through Galveston County Tuesday, residents braced for another round of rain Wednesday.

Strong showers moved in early over already-hit areas, causing concerns after the water did not disappear from the previous storm.

"It was just pouring down and you could not see because it was dark," driver Thessa Marshal said.

Marshal's car flooded after she was left looking for higher ground due to water on the feeder road along I-45 and Highway 96.

Cars had to stop on I-45 at Highway 96 due to flooding on the feeder road.

Six inches of rain fell in about six hours on Tuesday in Dickinson, which was enough to overwhelm some drainage systems and send water into the homes of many people who are just now returning due to damage from Hurricane Harvey last year.

Many of the culverts and ditches are not designed to handle that amount of rapid, heavy rainfall.

"From yesterday, our ditches were completely full and we started getting water backing up into the garage and into the house," said resident Shirley Robertson, who was worried about flooding.

City of Dickinson officials say they may have to rebuild much of the storm drainage systems to accommodate for the water.

According to city leaders, crews are also working to clear drains and ditches, but manpower is limited.

"It's high time. We can't really wait for money. We need to do something with Hughes Road that has no culverts to stop this from happening, because this rain is not going to stop. We can have more of it at any time," said Louis Decker with the Dickinson City Council.

The heavy rain did cause street flooding in front of Hughes Road Elementary School. No water got inside the school.

Traffic is starting to move again on the I-45 feeder to Highway 96.

Tuesday's rain was also a problem in Texas City, flooding the administration building at the College of the Mainland.

The building took on about two inches of water. Crews spent the day tearing off the baseboards and ripping up the carpets.

The building will remain closed through the end of the week, but classes resumed Wednesday morning.

High water remains on the feeder road along I-45 southbound to Highway 96.

On top of the flooding, the increased chances of a tropical depression forming in the Gulf of Mexico and ongoing recovery from Harvey has a lot of people anxious.

"It's understandable that when there is another storm brewing that people start to think this could happen again, and 'Oh my goodness, why is this happening out there?' There is this sense of hyper vigilance and wanting to know what could happen and also be prepared in ways that they may not have felt prepared for Hurricane Harvey," said University of Houston Dept. of Psychology Professor Rheeda Walker.

A Red Cross Shelter has opened in Texas City for those who might need it ahead of more storms.

Complicating things further, city officials in Dickinson tell Eyewitness News some of the canals are managed by the county, while others are taken care of by the flood control districts.

That means the city cannot fix those problems. However, they are trying to come up with a regional fix.