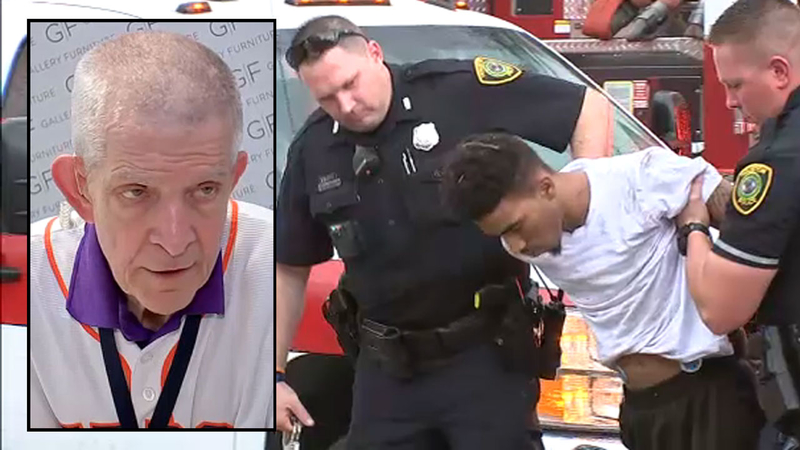 Jim "Mattress Mack" McIngvale said he was on the phone with Houston police, but they already knew why he was calling.

A one-of-a-kind Texan: Things we love about Mattress Mack

"They said, 'We're in pursuit of the suspects and they're on foot, and we're gonna get them in a minute,' and they got 'em," McIngvale said. "Great job to HPD, Art Acevedo, and all the people at HPD did a great job, and we're back to selling furniture."

Jim "Mattress Mack" McIngvale said he rushed towards the Woodforest Bank, where screams erupted during the robbery.

It was just after 5:40 p.m. Wednesday when police said the three suspects wearing masks held up the bank.

"One male produced a weapon and demanded everyone to the ground," said HPD Robbery Division Sgt. David Helms, who is assigned to the FBI Violent Crime Task Force. "The second male hopped the counter, cleared out all the drawers of the Woodforest Bank inside Gallery Furniture and the third stayed as a lookout."

Mattress Mack said he heard screams coming from the corner where the bank is located inside his store.

"I was rushed down there by the time it was all over," he said.

A security guard got a vehicle description and license plate. Patrol officers responded quickly and chased the suspects until they crashed their getaway vehicle on North Green River near Sultan Drive.

The suspects attempted to run off, but didn't get very far. Police recovered the stolen cash and later brought the accused robbers back to the store for bank employees to identify.

Mattress Mack said he was just glad no one was hurt.

"It's tragic that those type of people exist in our society, but they do, and HPD did a great job of apprehending them faster than I could ever imagine."