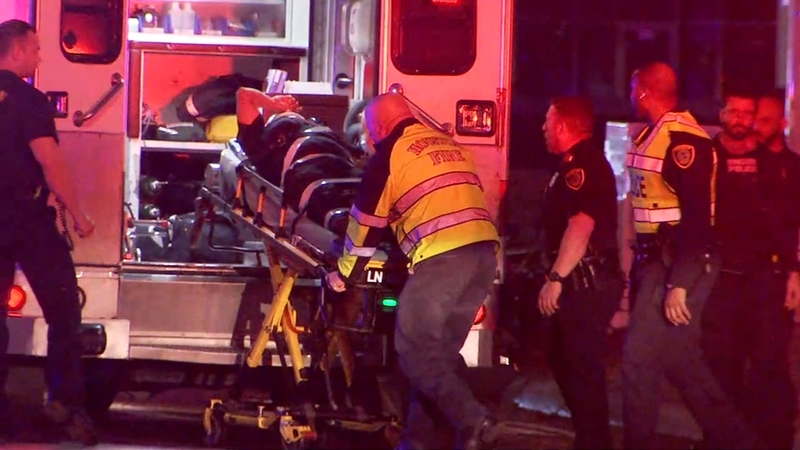 One happened on the mainlanes of the West Loop, while the other happened just off the feeder near Post Oak and Hidalgo.

Both officers are expected to be OK.

HPD said it was a busy night thanks to St. Patrick's Day, TX2K and RodeoHouston.

According to HPD, a Jeep exited off I-610 onto Hidalgo around 3 a.m. Friday and hit a tree.

Officers responded to the scene of the crash, as well as two wrecker drivers.

Investigators said the driver of the Jeep appeared to be intoxicated.

While an HPD officer, the driver of the Jeep and both wrecker drivers were standing in the road investigating the crash, police said a Honda came down Hidalgo and slammed into everyone.

The HPD officer and the driver of the Jeep were taken to the hospital, but are both expected to be OK.

The two wrecker drivers did not have to be transferred.

One of the wrecker drivers told ABC13 reporter Courtney Fischer that he hurt his knee, but was waiting until tomorrow to get it checked out by a doctor.

Video from the scene shows the HPD officer being loaded into an ambulance while he held his arm over his head.

Officers said it did not appear that the driver of the Honda was intoxicated, though they will likely be issued traffic citations for the crash.

A second HPD officer was injured along the northbound lanes of the West Loop near I-69 around 1:40 a.m. Friday.

Police said the officer was using her cruiser with emergency lights activated to block traffic after a previous crash when the driver of an Acura RDX slammed into her.

Investigators believe the driver was intoxicated.

Police said the driver was coming home from the rodeo at the time of the crash.

Investigators said the officer was banged up with significant injuries, but is expected to be OK.