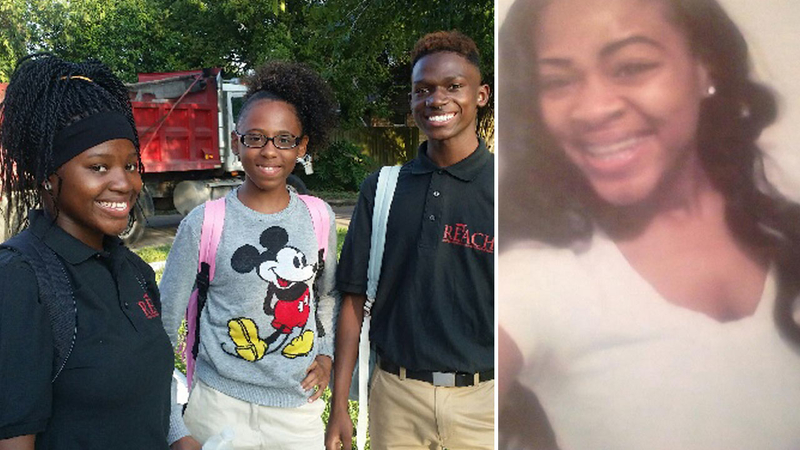 HOUSTON (KTRK) -- Two students were killed and two others seriously injured when a school bus careened off the 610 South Loop at Telephone Road. Houston police say a another driver struck the bus, forcing it off the road.

HISD officials say the bus was bound for Furr High School. There were four students on board, including two females who did not survive. A 17-year-old girl died at the scene, and a 14-year-old girl passed away at Memorial Hermann Hospital. The other two students on the bus, one male and one female, and the driver were seriously injured. They were taken to area hospitals. Their conditions have not been released, but Houston police describe their injuries as non-life-threatening. None of the victims have been publicly identified.

A Houston police spokesperson says a driver in a late model Buick LaSabre was traveling on the left side of the bus when the driver believed another vehicle was entering her lane. The driver swerved, striking the driver's side portion of the school bus. The bus driver overcorrected, flipping the bus over the guardrail, landing on Telephone Road below. The driver of the Buick has been detained for questioning, but has not been charged at this time. According to HISD, that other vehicle was driven by an HISD teacher.

The westbound lanes of the freeway were shut down for hours as police investigated the accident. The freeway lanes reopened just before 11:30am. There is heavy damage to the guardrail on the portion of the freeway that goes over Telephone Road. The intersection at the feeder road and Telephone remains shut down to traffic.

"Just hoping one of my friends wasn't in that accident," said Shane Broussard, a senior at Furr HS. "A lot of students rely on school buses. I'm sure a lot of students do not want to take the school bus home today. I'm sure they're scared. I would be too if I took the bus home."

"We are deeply saddened by this tragedy and the loss of one of our students," said HISD Superintendent Terry Grier. "I ask all of the HISD community to join me in praying for all of those involved."

We offer prayers for the victims of the terrible school bus accident this morning. An incomprehensible loss.-A

"The State of Texas mourns the loss of Texas students today in a tragedy no parent should ever have to experience," Abbott said. "Cecilia and I send our thoughts and prayers to the families affected by this heartbreaking incident, and I ask all Texans to support and keep Houston ISD and its community in their thoughts and prayers as they heal from this loss."

Prayers this morning for the HISD student who lost their life in a terrible school bus accident.

Lt. Governor Dan Patrick added a statement as well: "I am deeply saddened by the fatal school bus accident that claimed the lives of two Houston ISD students today. This tragic incident is a reminder of just how important it is to hug your loved ones and thank our first responders for their public service. Please join me in praying for the victims, their families and the HISD community."

The accident is under investigation by the Houston Police Department with assistance from HISD police.

The bus driver, Louisa Pacheco, has been with HISD for about three years and the school district says she has a clean driving record. Records show that the bus last underwent a maintenance inspection in June.

The bus was purchased new in 2008 and was equipped with lap belts for students. The bus was also equipped with seven security cameras. Footage from those cameras is being reviewed as part of the ongoing investigation.

"I was coming up Telephone Road on my way from work and I hadn't got quite to the red light and I seen the bus come off the freeway," said Anthony Martin. "The bus (came) off the freeway nose down at more than 50 miles an hour. It sounded like somebody just hit a brick wall."

The Furr HS community has created a fund to help families of the bus crash victims: gofundme.com/FurrHighSchool.

#Furr HS mom tells @abc13houston she showed up to class after #deadlycrash to make sure her son was okay. #abc13 #HouNews

We appreciate prayers for the #HISD students and driver in today's accident. Please bear with us as we seek to give accurate info #hounews

Prayers also with #HISD leaders as they help grieving families in bus crash. Death of a student most serious issue any district faces #txed