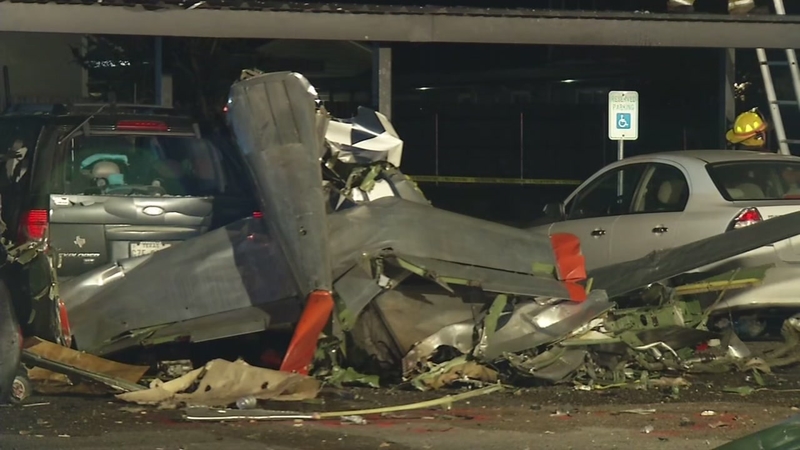 FREDERICKSBURG, Texas -- A vintage World War II fighter plane has crashed into the parking lot of an apartment complex killing the two people on board.

The Mustang was first built by North American Aviation in 1940 and was used by the U.S. military in World War II and the Korean War.

Fredericksburg is home to the National Museum of the Pacific War. The museum said on Twitter that one of those in the plane who was killed was a veteran. It is not clear if those killed or the plane were associated with the museum, which has a collection of World War II equipment and memorabilia.

The National Transportation Safety Board and the FAA said they would investigate at the site, which is about 70 miles north of San Antonio.
Report a correction or typo
Related topics:
texasplane accidentinvestigationplane crash
Copyright © 2022 by The Associated Press. All Rights Reserved.
TOP STORIES
Bodies found in back seat and trunk of burning vehicle in Liberty Co.
Manhunt for Pct. 5 corporal ambush suspect ends with arrest in Mexico
Search underway for suspect in Texas City double shooting
You could get paid to get your COVID vaccine or booster
Man who sold weapon to Colleyville synagogue standoff suspect charged
Will Clayton find love in Houston? The Bachelor announces watch party
Kathryn Kates, 'Orange is the New Black' actress, dead at 73
Show More
Texas brothers accused of killing stepfather for abusing sister
6 injured in explosion at Louisiana chemical plant
Supreme Court Justice Stephen Breyer to retire
Houston dries out today and tomorrow before 2 cold fronts
Amy Schneider's historic 'Jeopardy!' run comes to an end
More TOP STORIES News