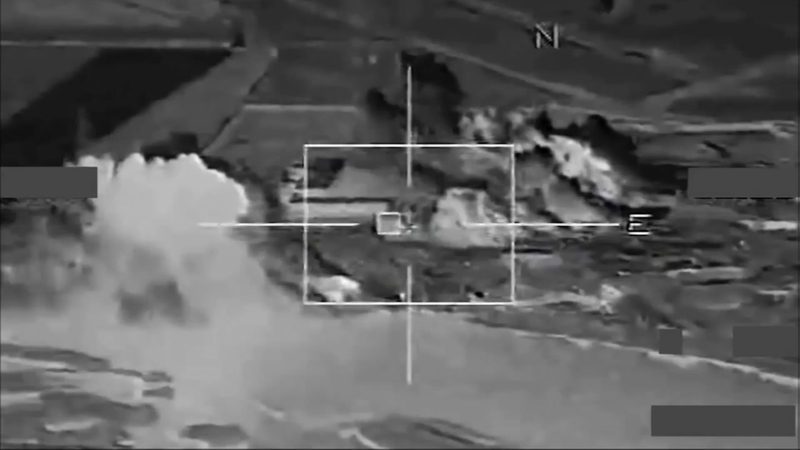 PARIS (AP) - French police are hunting for a second fugitive directly involved in the deadly Paris attacks, officials said Tuesday, as France made an unprecedented demand that its European Union allies support its military action against the Islamic State group.

The disclosure of a second possible fugitive, whom authorities said they hadn't identified, came as French and Russian warplanes pounded the jihadi group's self-declared capital in Syria. President Vladimir Putin ordered a Russian military cruiser to work with France on fighting the militants in Syria and U.S. Secretary of State John Kerry hinted at a possible Syrian cease-fire so the world could focus on crushing IS.

French and Belgian police were already looking for a key suspect, 26-year-old Salah Abdeslam, whose suicide-bomber brother, Brahim, died in the attacks Friday night that killed at least 129 people and left over 350 wounded in Paris. Islamic state militants have claimed responsibility for the carnage.

Seven attackers died that night - three near the national stadium, three inside the Bataclan concert hall and one at a restaurant nearby. A team of gunmen also opened fire at nightspots in one of Paris' trendiest neighborhoods.

However, French officials told The Associated Press on Tuesday that an analysis of the attacks showed that one person directly involved in them was unaccounted for. The three officials, who spoke on condition of anonymity because they were not authorized to provide details about the ongoing investigation, said the second fugitive has not been identified.

The Paris attacks have galvanized international determination to confront the militants.

The French government invoked a never-before-used article of the EU's Lisbon Treaty obliging members of the 28-nation bloc to give "aid and assistance by all the means in their power" to a member country that is "the victim of armed aggression on its territory."

Arriving for talks in Brussels, Greek Defense Minister Panagiotis Kammenos told reporters that the Paris attacks were a game-changer for the bloc. "This is Sept. 11 for Europe," he said.

Paris police said 16 people had been arrested in connection to the deadly attacks, and police have carried out 104 raids since a state of emergency was declared Saturday.

In Moscow, Putin ordered the Russian missile cruiser Moskva, currently in the Mediterranean, to start cooperating with the French military on operations in Syria. His order came as Russia's defense minister said its warplanes fired cruise missiles on militant positions in Syria's Idlib and Aleppo provinces. IS has positions in Aleppo province, while the Nusra militant group is in Idlib.

Moscow has vowed to hunt down those responsible for blowing up a Russian passenger plane over Egypt last month, killing 224 people, mostly Russian tourists. IS has also claimed responsibility for that Oct. 31 attack.

Seven of the Paris attackers died Friday, six after detonating suicide belts and one from police gunfire. However, Iraqi intelligence officials have told The Associated Press their sources indicated 19 people participated in the Paris attacks and five others provided hands-on logistical support.

French Interior Minister Bernard Cazeneuve conceded that "the majority of those who were involved in this attack were unknown to our services."

Mohamed Abdeslam, another brother of fugitive Salah Abdeslam, on Tuesday urged his brother to turn himself in. Mohamed, who was arrested and questioned following the attack but released Monday, told French TV BFM that his brother was devout but showed no signs of being a radical Islamist. He said Salah prayed and attended a mosque occasionally, but also dressed in jeans and pullovers.

Mohammed Amri, 27, denies any involvement in the Paris attacks and says he went to Paris to collect his friend Salah, according to his defense lawyer Xavier Carrette. Hamza Attou, 21, says he went along to keep Amri company, his lawyer Carine Couquelet said. Both are being held on charges of terrorist murder and conspiracy.

Belgian media reported that Amri and Attou were being investigated as potential suppliers of the suicide bombs used in the attacks, since ammonium nitrate, a fertilizer that can be used to make explosives, was discovered in a search of their residence.

Their defense lawyers said they could not confirm those reports.

Salah and Brahim Abdeslam booked a hotel in the southeastern Paris suburb of Alfortville and rented a house in the northeastern suburb of Bobigny several days before the attacks, a French judicial official told The Associated Press. She spoke on condition of anonymity because she was not authorized to speak about the ongoing investigation.

Austria's Interior Ministry said Salah Abdeslam, the suspected driver of one group of gunmen carrying out attacks on Paris, entered the country about two months ago with two unidentified companions. After the attacks, Salah Abdeslam slipped through France's fingers, with French police accidentally permitting him to cross into Belgium on Saturday.

Kerry flew to France as a gesture of solidarity and met Hollande and Foreign Minister Laurent Fabius on Tuesday.

Standing next to Hollande at the Elysee Palace, Kerry said the carnage in the French capital, along with recent attacks in Egypt, Lebanon and Turkey, made it clear that more pressure must be brought to bear on Islamic State extremists.

A cease-fire between Syria's government and the opposition could be just weeks away, Kerry said, describing it as potentially a "gigantic step" toward deeper international cooperation against IS.

A French security official, meanwhile, said anti-terror intelligence officials had identified Abdelhamid Abaaoud, a Belgian of Moroccan descent, as the chief architect of the Paris attacks.

The official cited chatter from IS figures that Abaaoud had recommended a concert as an ideal target for inflicting maximum casualties, as well as electronic communications between Abaaoud and one of the Paris attackers who blew himself up. The official spoke on condition of anonymity to discuss the sensitive investigation.

It was not exactly clear where Abaaoud is.

In other developments Tuesday:

- In a show of solidarity, British Prime Minister David Cameron was joining Prince William at a soccer match Tuesday night between England and France in London's Wembley Stadium. Armed police were patrolling the site.

- Another Belgian car with a shattered front passenger window was found in northern Paris - the third vehicle police identified as having links to the attacks.

- The Eiffel Tower shut down again after opening for just a day Monday, and heavily armed troops patrolled the courtyard of the Louvre Museum.

- Germany's top security official said a Syrian passport found with one of the Paris attackers may have been planted to make Europeans fearful of refugees. Interior Minister Thomas de Maiziere told reporters in Berlin it was "unusual that such a person was faithfully registered in Greece, Serbia and Croatia" amid the chaos of Europe's immigration crisis. He said the multiple passport registrations could be "a trail that was intentionally laid."

- German police arrested seven people near the western city of Aachen, but later released them, saying no links to the Paris attacks were found.