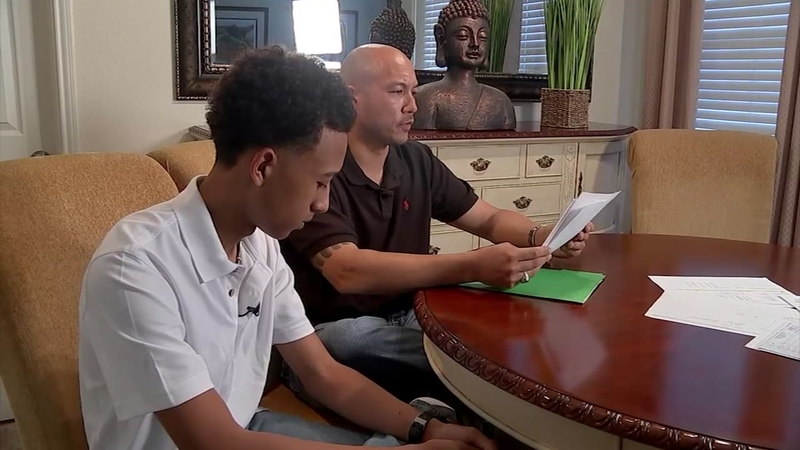 But in the case of 15-year-old Alec --an A and B student with no disciplinary problems -- Fort Bend ISD appears to be investigating him like he's a hardened criminal.

"You've got a kid, by who all accounts is a good kid," said dad Louis Hunter. "He's got letters from all his teachers, all his classes. He's never been in trouble."

Hunter is concerned about his son's future.

"There's a potential to for him to have something on his record for the rest of his life," Hunter said. "When he's 50 he's going to have to explain why he tried to buy a sandwich and chips with money he found."

Alec described the November day he found the bill.

"In the morning I was waiting in the commons, waiting for the bell to ring so we can go to first period," he said. "Once the bell rung I looked behind me and saw a $10 bill so I grabbed it. Other people saw it but I grabbed it first."

He said he had no idea the bill was fake.

"Later on that day. I tried to use it to buy a bag of chips and a ham sandwich," he said.

When he gave the $10 bill to the lunch lady, she ran a pen designed to identify counterfeit money.

"She didn't say anything to me," he said, noting that the cafeteria worker gave the bill to a school police officer.

He then paid for lunch with other money he had on him.

Two months later came the shock: "I got a paper saying I was being charged with a felony," he said.

Neither father nor son got a call from the school. The letter was from the Fort Bend Juvenile Courts.

"The letter stated that my son was referred to them for 'Forgery' and to bring a host of documents along with him for an 'intake,'"Hunter said, meaning fingerprints, mugshot, handcuffs -- the works.

Hunter said they offered Alec a deal. Simply go to counseling, behave well for six months and prosecutors would dismiss it. All Alec had to do was plead guilty.

"If he'd done wrong I'd giftwrap him, put him in a box and deliver him myself," Hunter said. "But that's that the case here. This was an honest mistake."

Fort Bend ISD officials had very little to say about the case. "Fort Bend ISD has its own police department whose responsibility is to investigate cases that are brought to their attention in a timely and appropriate manner," officials wrote in a statement to abc13. " In cases where there is probable cause for delinquent conduct, the cases are referred to the Fort Bend County District Attorney's office to determine whether or not a petition should be filed."

Hunter is flummoxed at the hours officials have put into a case involving a $10 bill and a ham sandwich.

"Because of a $10 bill found in a lunchroom and a sandwich and a bag of chips we've got a police officer, an assistant principal, two probation officers and DA and and a prosecutor involved," he said. "For $10... That's stupid."