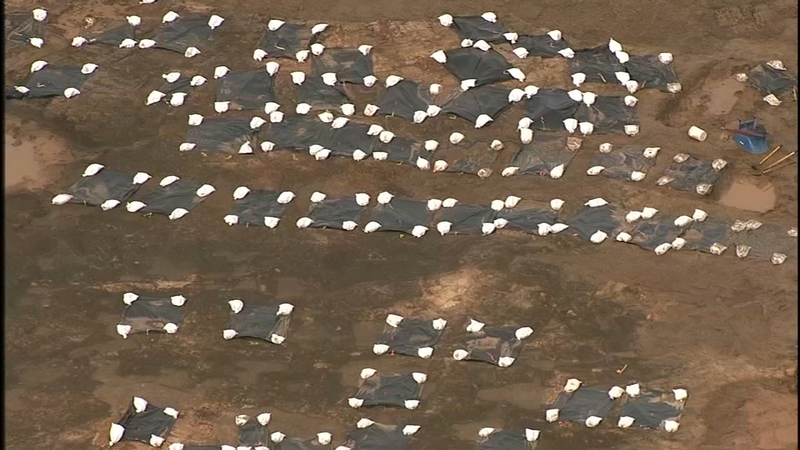 Ceremony held to bless the grounds of Sugar Land 95

SUGAR LAND, Texas (KTRK) -- Some protesters are calling for the bodies of 95 African-Americans found at a Fort Bend ISD construction site to be DNA tested.

Half a dozen demonstrators yelled, "Test the DNA, find the families," during a remembrance ceremony Sunday night in Sugar Land.

They don't want the remains reburied until the descendants are located.

Protesters had to be escorted out of the ceremony, which was meant to bless the ground where the so-called "Sugar Land 95" were discovered in April 2018 at the construction site of Fort Bend ISD's James Reese Career and Technical Center off Highway 90.

Historians believe the remains belong to incarcerated African-Americans who were part of the convict leasing and labor program, which ended in the early 1900s.

The bodies include one woman and a 14-year-old child.

Over the summer, Fort Bend ISD announced that the remains will be reinterred at the same site where they were found. As part of ongoing negotiations with the county, the district also plans to dedicate 10 acres of land to the county for a future planned memorial park where members of the community can visit and pay tribute.

"This has been an unprecedented journey for Fort Bend ISD," said FBISD Board President Jason Burdine back in July. "We are thankful for the offer of county leaders to join us in this effort to memorialize these individuals and learn as much as we can about the convict-leasing system. We appreciate our local lawmakers who worked together to support the legislative changes that made it possible for us to take these steps forward."

The district said earlier this year it will collect DNA analysis from the bodies, which will be processed at the Texas Archaeological Research Laboratory at the University of Texas.

There is no definitive date yet for the reburials, but caskets will arrive this week.

Fort Bend ISD says each casket and grave will have a specific marker, and that if DNA testing finds descendants, the remains can be relocated.