House of Pies gears up for Thanksgiving rush 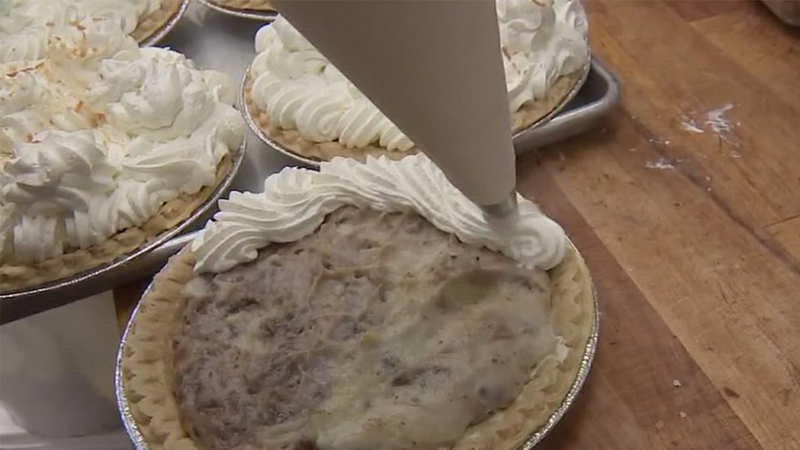 HOUSTON (KTRK) -- The folks over at House of Pies are getting ready for a crush of people this week.

We stopped by the Kirby location of the famous bakery Monday afternoon. We found workers buzzing around the kitchen getting ready for crowds eager to buy a pie or two for Thanksgiving. Managers at House of Pies say they've been preparing for Thanksgiving week for the past two months because they make everything from scratch.

"During Thanksgiving, the most popular are pumpkin and pecan and we do countless amounts of those," says Chuck Ganim, who manages the Kirby location.

So many that he says it's almost impossible to predict how many of their famous pies they'll sell. So they just keep baking.

"Our busiest days are Tuesday and Wednesday," Ganim said. "Wednesday is definitely very busy. But we try to get people in and out of here as fast as possible."

Traditionally, he says, they've been busiest Wednesday morning straight through until Thursday morning around 3:00. But Ganim tells us last year, Tuesday was just as busy as Wednesday.

Some customers have already gotten their holiday pies. The Greco family picked up a second large batch of pecan and pumpkin pies to give away to their employees.

"It's that time of year. And we like to give to those who have helped us during the year," said Richard Greco. "We give back to them. And they like House of Pies pies, and that's what they get."

"Some of these pies go to our employees," adds Carolyn Greco. "And our employees who are on diets or for some reason don't need the pie, or they're out of town, we donate those pies to the Montgomery County Food Bank in their name."
If you're wondering if you're too late to order your pies, don't worry.

"We don't take any orders for this week. Zero. It's just first come first served. And there's a 98-percent chance we'll definitely have everything available," Chuck Ganim said.

Just be prepared to stand in line.