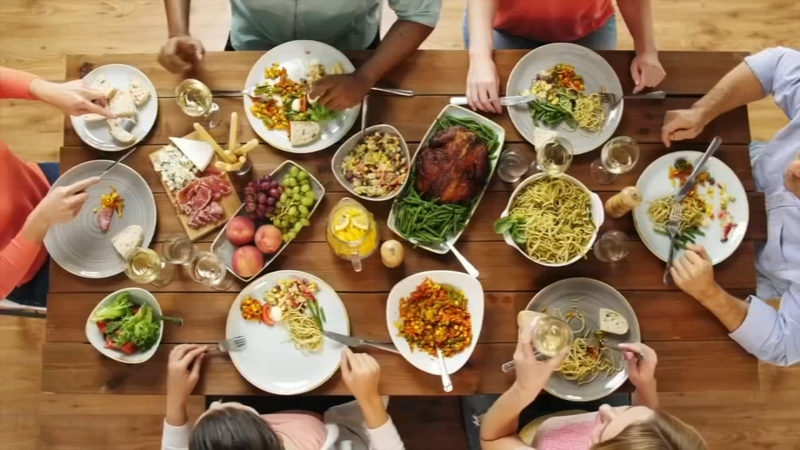 HOUSTON, Texas (KTRK) -- Whether you're cooking for two or 20, a typical Thanksgiving menu is filled with a variety of rich flavors, but Dr. Noreen Khan-Mayberry, known as the Tox Doc, says these foods can be filled with sugar, salt and chemicals.

"It's one meal a day, but it's a meal where people indulge and they turn that one meal into hours and hours-long grazing," said Dr. Khan-Mayberry, an environmental, food, nutritional and space toxicologist.

She wants you to read the ingredients on the back of those pre-made goods in boxes, bags and cans before leaving the grocery store.

"You're just thinking about family favorites and sometimes, those family favorites, the ingredients in some of your favorite products, have changed over time," she said. "They have more and more chemicals."

A familiar, but mysterious ingredient, she says, is in the phrase "natural flavoring," which can be found in the very star of the feast: the turkey.

"The problem with that term 'natural flavoring' is you don't know what it is," said Dr. Khan-Mayberry. "It's almost like a mask to hide a number of ingredients that they don't explicitly want to state."

AccuWeather explains why we eat turkey on Thanksgiving in the United States.

Also, beware: most canned vegetables are tainted with the BPA that lines the inside of the can. Khan-Mayberry suggests looking for cans that say "BPA free lining."

"These are all laboratory created chemicals," said the Tox Doc.

Then there is also a chemical salt called tetrasodium pyrophosphate, a main ingredient in marshmallows.

"TSPP has been shown in laboratory animals to cause kidney issues and to also cause genetic changes in unborn chicken embryos."

Dr. Khan-Mayberry also reminds you to be mindful of guests with pre-existing conditions such as hypertension, heart disease, diabetes and even cancer survivors.

She says the stress of the holidays combined with this gluttonous affair can make for a life-altering meal.

"I was just talking to someone the other day who said that they had a stroke on Thanksgiving," recalled Dr. Khan-Mayberry.

Her advice is to prepare as many meals and dishes as you can from fresh foods and buying little to nothing from a box or can. She also encourage guests to drink lots of water, which helps flush out sodium and toxins.