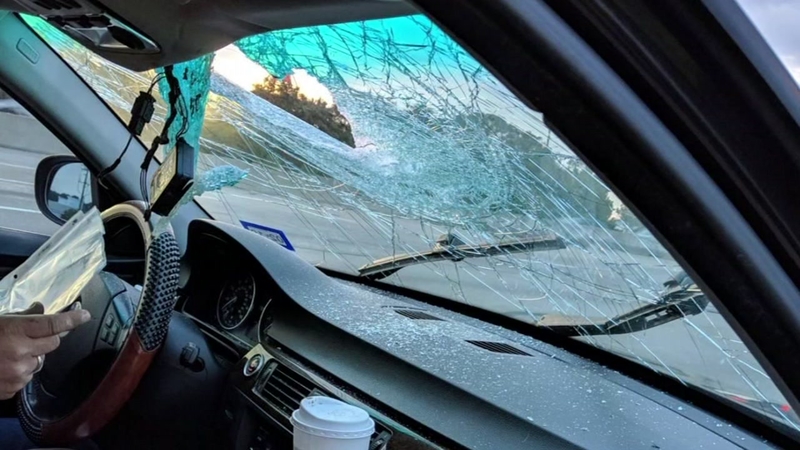 HOUSTON, Texas (KTRK) -- It was a near-death experience for several drivers on I-45 heading into Houston on Monday morning when a trailer hitch became airborne.

"This was found in the passenger seat of a BMW this morning," said Sgt. Raymond Parker with the Harris County Sheriff's Office.

The heavy duty metal was kicked up by an 18-wheeler during rush hour traffic near the Spring Cypress exit.

Sgt. Parker says it hit two cars, blowing out their tires, before blasting straight through the center of the BMW's windshield. It landed in the passenger seat, missing the driver by mere inches.

"And obviously from the pictures, you can see the whole front windshield is shattered. The hood is crinkled in. I opened the door and he's still sitting in the driver's seat with his seat belt on, calm as could be," said Sgt. Parker.

"The front right side of my car kind of sank pretty quick," said Salini.

She was on her way to work in that rush hour traffic when she spotted sparks flying at her.

"There was really no way a whole bunch of people could have avoided it or noticed it all at once, because there were too many other cars," said Salini.

She tells Eyewitness News she feels like she got off easy with just a dented rim and blown tire.

"You never want to wake up and say 'Oh, I had a near-death experience today.' It just makes me feel like everybody needs to be more aware of what they're doing and how it impacts other people," Salini said.

Sgt. Parker says the trailer hitch will be added to the ever growing collection of dangerous road debris that includes gas cans, tires, ladders and metal pieces.

"Just little pieces of metal that can zing right through your windshield with ease," said Parker.

The worst spot for dangerous roadway debris, he says, is U.S. 290 inbound at the 610 Loop interchange near I-10.

"And you can look over to the right shoulder and just littered with debris. I mean tire after tire, hub cap after hub cap," Parker pointed out.

He says securing your load should be a priority for every driver. He reminds you to lock your hitch and tighten straps because it may save a windshield or a life.

Sgt. Parker says the best way to try to avoid becoming the victim of flying road debris is by staying at least six seconds away from the vehicle in front of you, to allow for time to take evasive action.