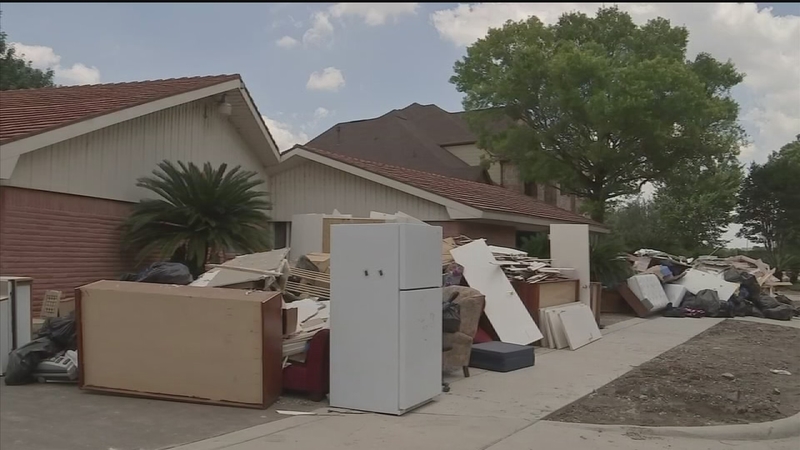 The agency is encouraging all who sustained property damage to register atwww.disasterassistance.gov, via smartphone at m.fema.gov or by calling 800-621-3362. By reporting your damage you can qualify for assistance including temporary housing, medical and dental expenses and even through low interest disaster loans.

Some victims tell Eyewitness News a little-known City of Houston ordinance which applies to homes in flood plains may keep them from rebuilding their homes.

"Unless I raise my house, I can't fix what's broken," said Elise Passy. She says she has flood insurance but after reading permitting requirements from the City of Houston, she believes she will be required to elevate her home before being granted any construction permit.

City officials say the issue is what it considers "substantial damage" to the home, which it defines as of sufficient magnitude that "...the cost of restoring the structure to its pre-damage condition equals or exceeds 50 percent of the market value of the structure."

According to Jamila Johnson, a public works managing engineer with the City of Houston's Flood Plain Management, homeowners must seek a base flood elevation certificate before any construction permit will be granted by the city. "It's a serious issue for properties that are substantially damaged," Johnson said.

She also notes that homeowners can appeal the "substantial damage" designation or simply present proof that the property meets certain elevation criteria.

"For us, it's a disaster. For this Jewish community, it effectively could ruin the community," said Rabbi Barry Gelman of United Orthodox Synagogues.

Their facility, located in the 9000 block of Greenwillow Street, was flooded, as were so many nearby homes of congregants. Gelman says Orthodox Jews are not supposed to drive on the Sabbath, so they must live within walking distance of the Synagogue to go there and pray. If the City of Houston will not grant permits for construction to some homeowners now he says it will force members to move, tearing apart the community which has been built around this synagogue for more than 100 years.

"It's a pretty scary thought... threatens over a 100 year history," Gelman says.