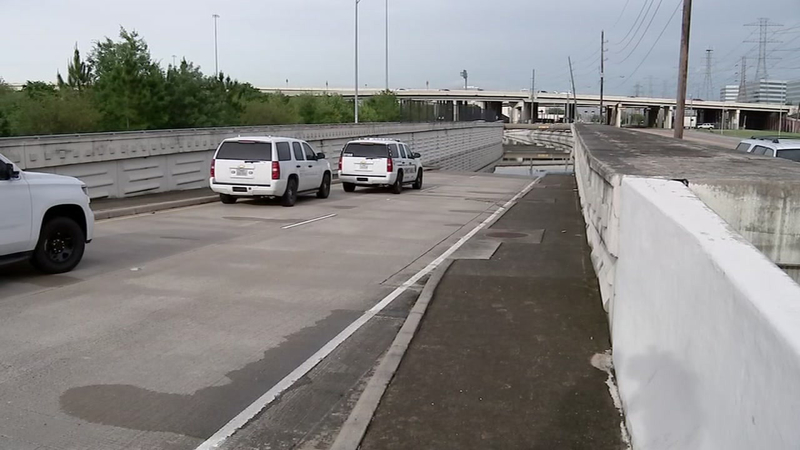 HOUSTON (KTRK) -- Crews are still searching for a driver who may not have made it out high water near the Galleria.

The recovery effort is happening at the east end of the Westpark Tollway on the Post Oak exit.

Officials with the Harris County Precinct 5 Constable's Office tell Eyewitness they know a vehicle drove into floodwater around 6:10am but they never saw anyone get out. An Incident Response Team Unit had blocked off the exit. The worker inside that unit says a vehicle squeezed by and drove right into the water. The worker followed and dove in but couldn't save the driver.

"The pumps out here, they have a lot of downforce. He made two attempts to get to the car. At that point,he had to save himself and get out of the water, said Capt. Terry Allbritton.

HPD's Dive Team surveyed the flooding and determined it was too risky to send divers in because of the active pumps.

Tollroad contractors brought in another pump to move the water out faster. Authorities are waiting for the water to recede to make the recovery.

In the same area of southwest Houston, two people were found dead inside two different vehicles in the 3600 block of the West Loop South. One of them was Sunita Singh.

In Waller County, a 56-year-old Royal ISD teacher was found inside a submerged vehicle off Adams Flat Road. Authorities there believe he drove into high waters and drowned. HPD divers have been unable to retrieve the woman's body, because the pumps in the area would put the divers in danger.

"Clearly, this is a severe life threatening event. Please cooperate with Waller County officials in making sure that this is the only fatality we have for this flood event," Waller County Judge Trey Duhon said in a prepared statement. "One fatality is one too many. Our thoughts and prayers go out to this gentleman's family. Let's all work together to make the remainder of this emergency as safe as possible for everyone involved."
EMBED More News Videos

Authorities believe a woman drove her vehicle into standing water that could be up to 20 feet deep.

Brandes did not release the woman's name and would not provide details about where the incident happened.

Authorities also found a man's body in a submerged 18-wheeler on the West Hardy service road at North Sam Houston. However, they are unsure if the man drowned. They say crews monitoring the road due to high water saw the man drive directly into the water. There is a possibility that he suffered a medical issue before entering the flood waters.

Rescuers tried to remove his body from the truck, but they've been unable to reach him.