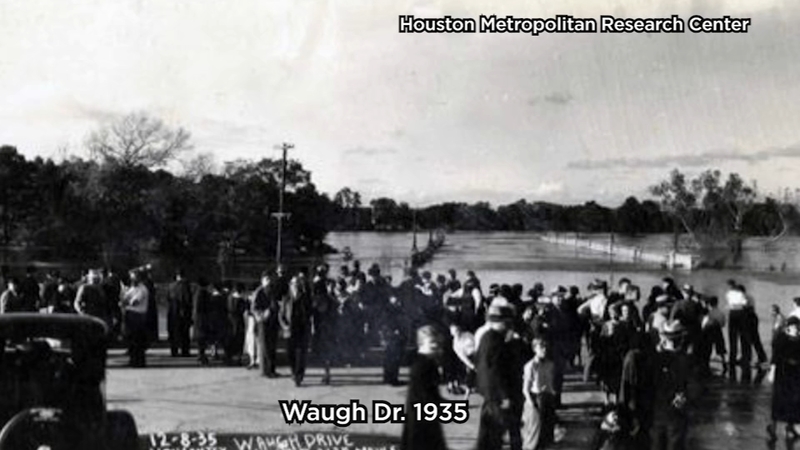 With two floods in seven years, including one that killed five children. City officials had to act.

HOUSTON (KTRK) -- "Almost without warning, the muddy waters swirled down upon unsuspecting families, separating mothers from their children, and leaving in the mucky wake seven drowned, including five children and two adults."

Those were the words Houston officials used to convince the state legislature to create the Harris County Flood Control District in 1937, to combat flooding in the area.

Houston had suffered numerous floods since its inception but the flood of 1935 was different. First, it came just six years after the flood of '29. Residents and business owners had just finished rebuilding, only to be hit again by a devastating flood. Second, this one was heart-breaking. The bodies of five children were discovered in the aftermath of the flood, and two adults were found floating in Buffalo Bayou.

City and County officials presented a pictorial petition to the state legislature in 1937 called "Wild River". The state approved the formation of the Harris County Flood Control District.

Not long after that, in the 1940's, the Army Corps of Engineers began construction of the Addicks and Barker dams to prevent flooding in Houston.

The cause of the flood was a huge amount of rain across Harris County. The water drained downstream to Houston.

The Monthly Weather Review reported, "During a 42-hour period on the 6th, 7th and 8th, with amounts ranging from 5 1/2 inches at Houston to approximately 20 inches near the center of the 406 square mile watershed." Buffalo and White Oak Bayous overflowed at their confluence near the center of Houston, flooding more than 100 city residential blocks."

The Central Water Plant was knocked out of commission, leaving the city without water, and leaving firefighters with no water to fight fires. The Houston Fire Department used a pumper to suck up the muddy waters of the flood, to fight a blaze at the Yellow Cab Company.

Flood waters reached as high as the second story of the Sears-Roebuck store on Buffalo Drive and Lincoln Street. Numerous buildings collapsed and others were heavily damaged.

Damage was estimated at 2.5 million dollars.