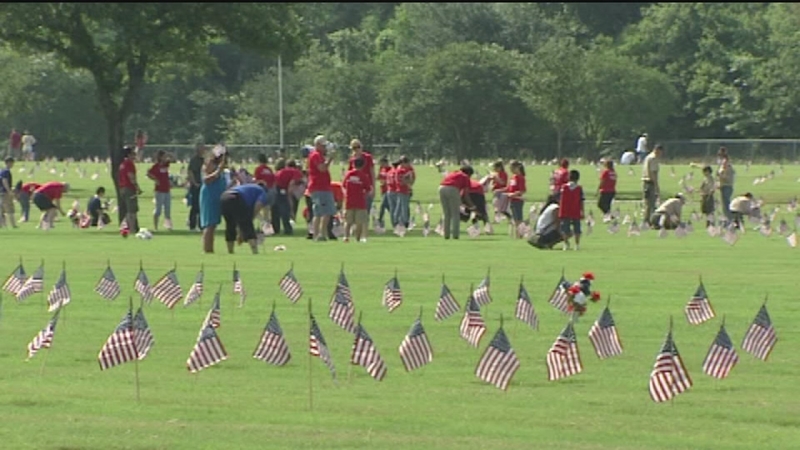 HOUSTON (KTRK) -- At Houston's National Cemetery, thousands of American flags were placed on the graves Sunday morning to note the sacrifice's of thousands of fallen troops.

"We are out here to put flags on the graves of veterans and to honor their memory," said volunteer Carlos Markham.

"This is very humbling, to be amongst our heros," said Lt. Commander Mike Connor of the Texas State Guard.

Each grave was marked with its own U.S. flag, a symbol of the country they served and in some cases, for which they died.

"Memorial Day is not just a party, it's to remember the sacrifice," Markham said.

The organization, Flags for Fallen Vets, assembled more than 2,000 volunteers to place more than 68,000 flags on the grave of every veteran at the Houston National Cemetery. Each volunteer was doing it for their own special reason.

"My father and his brother all served in World War II and afterwards," said Dale Zellmer. "I have a daughter whose in the Army Reserve as a lt. and a son in law whose in the Marines."

Other volunteers believe it teaches a priceless lesson to our next generation.

"Gratitude, sorrow, respect, determination, to continue to show it for those who have made the ultimate sacrifice for our great nation," said Shawn Corriston.

The motivation for coming here to do this work on a holiday weekend is powerful beyond measure.

"It reminds you of friends, colleagues, relatives and people that have served in the past, brings it home," Connor said.