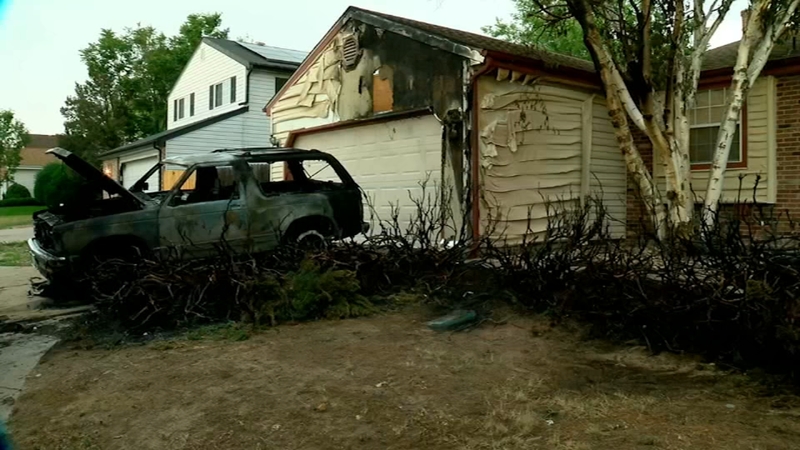 DENVER, Colorado -- Denver Fire is investigating after a devastating house fire was reportedly sparked by fireworks.

Dramatic dash cam and cell phone video captured the moment a bush caught fire and quickly spread to a car and house.

KMGH reports William Birkett shot the video after he saw a firework shoot into the bush. He quickly pulled over to help.

"I tried my best to put it out with the water bottles that I had in my car. The neighbor was using his garden hose," said Birkett, who said the fire quickly grew out of control. That's when they heard a woman screaming. "Myself and two other men, we just started running towards the house. And the two men pulled her out while I held back the bushes and I ran back inside to make sure no one was inside."

Firefighters arrived on the scene within minutes and put out the fire, but serious damage had already been done to a car in the driveway and the siding on the house.

Friends say the woman rescued is okay. They say illegal fireworks are a nightly threat in the neighborhood.

"It sounds like a bomb, a war zone or something, and you don't know if it's going to hit a tree or a roof," said Della Swanson, who lives across the street. "So, all of us are in danger."

Birkett said he shot the video to show others how their careless celebration could put lives in danger.

"I just saw something that I felt needed to be shared with everybody, especially since it was caused by fireworks," he said.
Report a correction or typo
Related topics:
colorado4th of julyfirehouse firefireworks
Copyright © 2022 KTRK-TV. All Rights Reserved.
TOP STORIES
Daylight shows home destroyed after standoff with shooting suspect
What we know about man accused of shooting 3 HPD officers
5 people charged in connection with Pct. 5 corporal's murder
Driver dies after slamming into 18-wheeler's trailer on US-59
Woman shot in the shoulder during robbery set up in SW Houston
Prepare for a major closure at I-69 and 610 West Loop this weekend
Officers escort body of corporal killed in ambush to funeral home
Show More
Clouds clearing today, sunny through the weekend with rain next week
ABC13 obtains HPD scanner traffic of chase that led to shootout
'Tiger King' Joe Exotic resentenced to 21 years in prison
10 injured in PA bridge collapse; human chain formed to help
Bayou Bistro and Bar owner killed in Texas City shooting
More TOP STORIES News