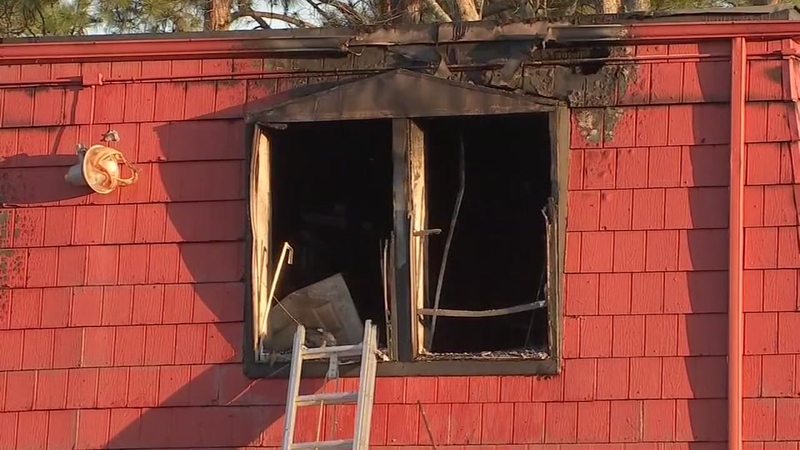 Residents first reported flames just after 4am at the Maple Trail Apartments, located at 2001 Burke Rd.

The victim, 62-year-old David Brown, died in the blaze. According to Pasadena Fire Marshall David Brannon, four other people suffered injuries. Paramedics airlifted three of them to the Texas Medical Center. The other was also taken to the hospital. All are expected to survive. Firefighters said they suffered non-life threatening injuries.

"Tonight is always the worst-case scenario you could ever have for a firefighter or even a police officer driving up," said Marshall Brannon.

Eyewitnesses like Brandon Marquez and Ty Hughes recalled the panicked moments to abc13. They told us people jumped from second-floor windows to escape the flames.

"The family's apartment caught on fire. They were trying to get the baby out so they threw the baby outside the window," said Marquez. "The lady she was covered in blood. She was holding her hand."

Among the chaos were at least two calm, methodical officers there to help.

Officers John Lisano and Ryan Childers stood below the burning apartment. They convinced 26-year-old Ruth Garcia to toss her 3-month-old son Martin through the broken window.

"I told her just to stick herself as far out the window as she could with the baby and just let go," Lisano said, "I'll catch him."

Officer Lisano said he caught the baby like a football. Meanwhile, Garcia was still trapped as heavy, black smoke filled the apartment.

"Myself and another bystander caught her," Officer Ryan Childers said.

Neighbors want to thank the officers for acting so quickly.

Garcia and her baby will spend the night in the hospital, according to the Pasadena Fire Department. They are expected to recover.

"They were the first ones to arrive," Yolanda De Leon said. "They were trying to get inside, even though they aren't firefighters. They were risking their lives to save those people, and it was amazing."

Firefighters do not suspect any foul play at this point. They're still investigating the case of the fire.