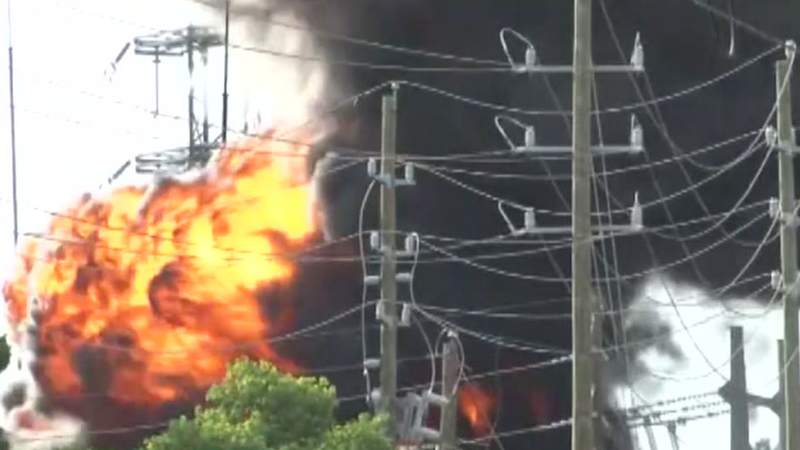 Authorities were called to the scene of the fire at 12801 Grant Road just after 5pm Tuesday. As it got bigger, those in the area heard one explosion and then another. Concerned about air quality because of the billowing smoke, officials called for a shelter-in-place and nearby Hamilton Middle School was evacuated. For a period of time, firefighters had to just watch the transformer burn as 10,000 customers affected turned into 75,000.

"There was a large transformer that faulted and caught fire. Exactly how that happened, whether it will be an overload or something like that, we're going to work with them (CenterPoint) to get that information," Capt. Dean Hensley, with the Harris County Fire Marshal's Office told Eyewitness News.

No one was hurt. The shelter-in-place was lifted late Tuesday after the fire burned for three hours.

Crews worked through the night to reroute power and restore service.

We are asking customers to be prepared to be without power for 10-12 hours. #hounews

Lone Star College says its Cy-Fair location will remain closed until Wednesday morning. Cy-Fair ISD is expected to make an annoucement by 5am Wednesday of any potential closures.

Thousands without power due to substation fire, Tracy Clemons reports.

Residents in the Coles Crossing neighborhood near Barker Cypress Road say they're making the most of the situation. Carolyn Rospierski says she was in the middle of making dinner when the power went off.

"The kids were reading their books near the window while it was still light, doing homework and then of course we got out and got some bike riding in," Rospierski said.

Sarah Van Eman and her husband lost power but they plan to spend the evening with their neighbors a few doors down.

"They have a generator and we do not. So whenever the power goes off, we're like 'hey Fred and Wendy we're coming down to your house'," she said.