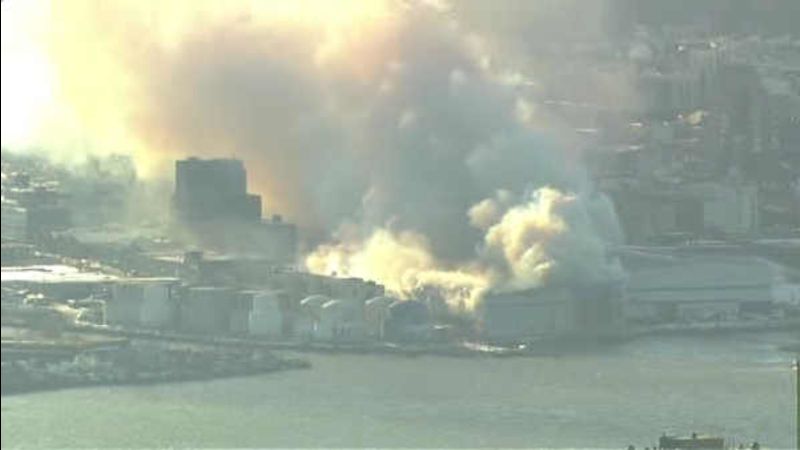 NEW YORK -- Giant clouds of smoke rose from a 7-alarm fire that destroyed a warehouse and floated across Brooklyn and into Manhattan on Saturday - a day so cold that water trickling across the helmets of a small army of firefighters quickly froze.

One person standing outside the building as firefighters did their work was treated for smoke inhalation at the scene, but refused further treatment, authorities said.

About 275 firefighters stayed on the fire's perimeter, training streams of water at flames and smoke fueled by paper inside the storage facility in the trendy Williamsburg neighborhood.

"The building is a total loss," said James Leonard, chief of department for the Fire Department of New York. "We're putting in a tremendous amount of water and yet it's still burning."

Leonard said firefighters were left fighting the elements, both hot and cold.

At a news conference nine hours after the fire was reported at 6:28 a.m., Leonard said firefighters had no choice but to stay outside the four-story building as the fire raged.

"Right now we feel we have the fire contained, but it's going to take an extensive operation to protect all the buildings that are out there," he said.

He said firefighters were concerned that flames could jump to a second building on the same block, which has the same owner and is also a storage warehouse.

The fire was reported only two hours after firefighters had put out a small fire on a shelving unit in the same building.

Leonard said investigators want to know if the two fires are connected.

"The nature of what happened is under investigation by our fire marshal," he said.

By afternoon, firefighters were being rotated as they coped with strong winds and temperatures so low that ice formed on their helmets.

"This is going to be smoldering for quite some time," Leonard said of the fire. He estimated crews would be at the scene for two to three weeks.