Federal flaps: Your tax dollars were used for these bizarre ventures 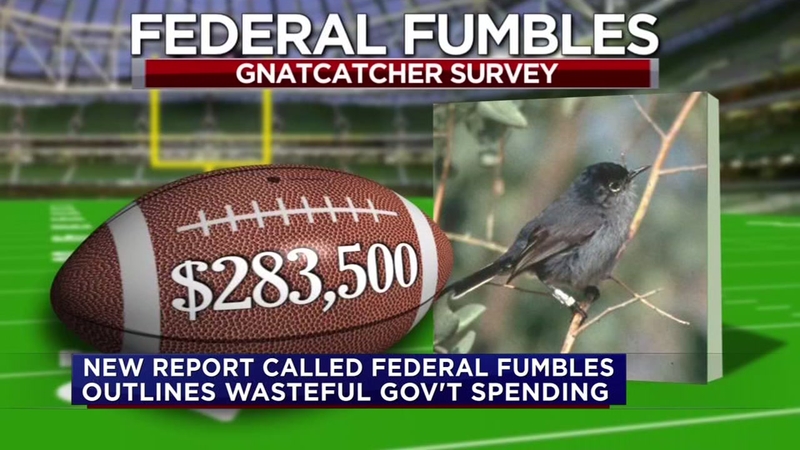 Your tax dollars were used for these bizarre ventures

HOUSTON (KTRK) -- There are fumbles we see on Sundays during football season. They are game changers on the gridiron. Then there are those that happen in a different arena, that of politics and government spending.

Senator James Lankford of Oklahoma is out with a new report called "Federal Fumbles" 100 ways the government dropped the ball."

"The National Park Service did a study on what do bugs do when you turn on a light in a dark rural place," he said at a press conference releasing his findings.

Also among his findings:

$283,000 spent on a defense department survey of a bird called the gnatcatcher.

More than $48,500 on a study of Russians' cigarette smoking habits.

$43 million for a compressed natural gas station in Afghanistan

Tens of thousands on various programs, including a silent adaptation of Shakespeare's Hamlet.

"The government is so massive that even people with the best of intentions can't keep a handle on everything," said Jon Cassidy, a reporter for Watchdog.org.

Cassidy covers government waste, fraud, and abuse. He says it's not worth getting upset over well-intentioned government bloat. There's just too much of it at every level.

"It's the nature of government to be a little wasteful and inefficient. And it's just important to keep shedding a spotlight on that, letting people know exactly what they're getting for their money. But I reserve my anger for people actually profiting of their position," he said.

Senator Lankford says he doesn't want his list to be the only one. He wants other offices to partner with him, develop their own lists and come up with solutions.