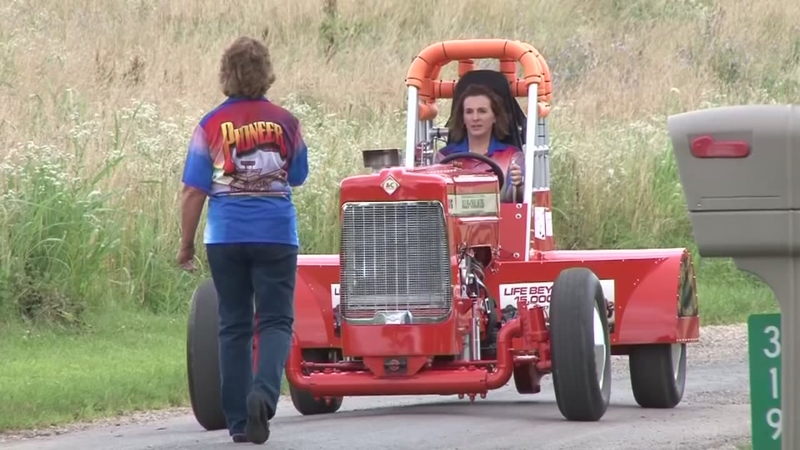 MARIETTA,Ohio -- Thirty years ago, a tractor belonging to a father-daughter duo was plowing fields. Today that same tractor has a much different purpose.

"What do you mean you're going to Arkansas to set a land speed record? It's odd, but it's very normal for us," driver Cathy Shalitz told WOWK.

Normal is relative, anyway. Everyone has their own version of it.

For the Archers, this is definitely normal.

Dave Archer, Shaltiz's father, loves to build and make things. He has an idea and that idea comes to life.

This idea, though, came to him during the fight of his life.

The recovery for Archer's double lung transplant involved a lot of lying around, something, as you can imagine, he isn't so good at. He's farmed for decades, loves to work on cars and his farm equipment.

What if they were able to set a record?

"He approached me about being the driver," said Shaltiz.

She wasn't so keen on the idea at first, but much like her father, she isn't known to back down from a challenge.

"I thought he was nuts and he thought I was nuts for not saying yes. We said, yeah let's do it," she said.

And that was that.

They learned the official land speed record on a tractor was 96 miles per hour, set back in 2015.

Next step involved the plans on paper, which they vowed to keep original.

Original, yes, but safety is everything. In fact, they made sure it was overkill.

Shalitz was able to hit top speeds of right around 20 to 30 miles per hour in front of her family home, and that was it until Arkansas.

The ultimate question was if they could they beat 96 miles per hour.

Pass one wasn't so great.

"Don't give up. Don't let up. Just keep going and see what happens," Cathy said.

Pass two was better, but pass three beat that world record by a long shot.

The tractor hit a speed of 106 miles per hour, and keep in mind, the only practice this family had was in front of their home.

Shalitz was longing for more.

"We were overly overjoyed. Not only did we beat the record, but we smashed the record," Shalitz said.

Just like that, this family has gone from recovery to record-holding.

As far as that record goes, Archer says they're meant to be broken.