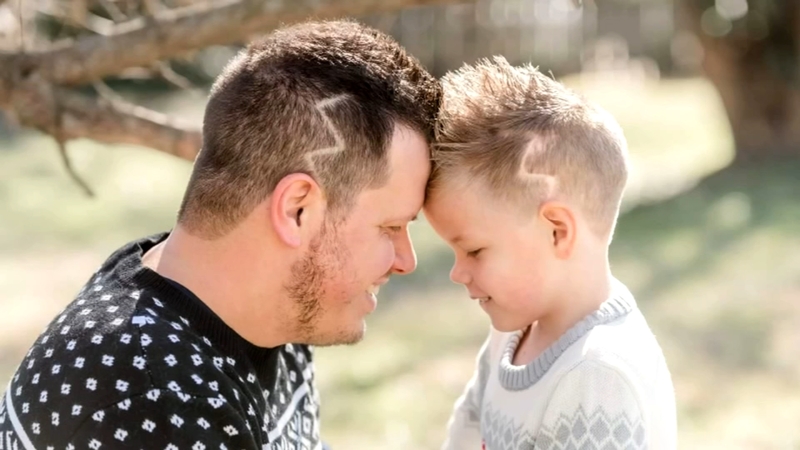 PACIFIC, MO -- A Missouri father, Jonathan Tynes, had his barber cut a lightning bolt design into the side of his head.

The haircut did not come about because he's a huge Harry Potter fan or a Zeus aficionado, it's to honor his son.

Tynes' son Hunter was born with a condition that caused the plates in his head to be fused together prematurely.

"It just really hit me in the gut, it was very heart wrenching that something could be severely wrong with him," his mother Danielle Tynes recalled in an interview with KMOV.

At 21 months, Hunter went under the knife to have reconstructive skull surgery.

"So he had to be cut from ear to ear, opened up and his skull totally reshaped," Jonathan said.

The surgery went well, and doctors used a zig-zag pattern cut all the way across his skull. That zig-zag design was chosen to help his hair grow back and cover up the scar.

An active Durham 7-year-old is on the road to becoming free of his sickle cell disease and getting back on the tennis courts and ski slopes all thanks to a bone-marrow transplant from his "superhero" older brother.

For most of his head, the zig-zag design worked, but the scar tissue on the side of his head didn't cooperate--leaving Hunter with a sort of lightning bolt on the sides of his head.

The visual reminder of his surgery made Hunter stand out; it was something he grew more and more self-conscious about.

"I said, 'Your lightning bolts are really cool. I wish that I could have that,'" Jonathan said. "And he goes, 'Well, why don't you? Why don't you have them? If they're so cool why don't you get them?' I said, 'OK then I will."

So that's what Jonathan did. He went to the barbershop and got replica lightning bolt scars shaved into his hair.

"The messages that poured in, the people that said how it touched them, it's been really incredible," Jonathan said.

And the most important critic agrees Hunter told his dad that he was happy that they were best friends.