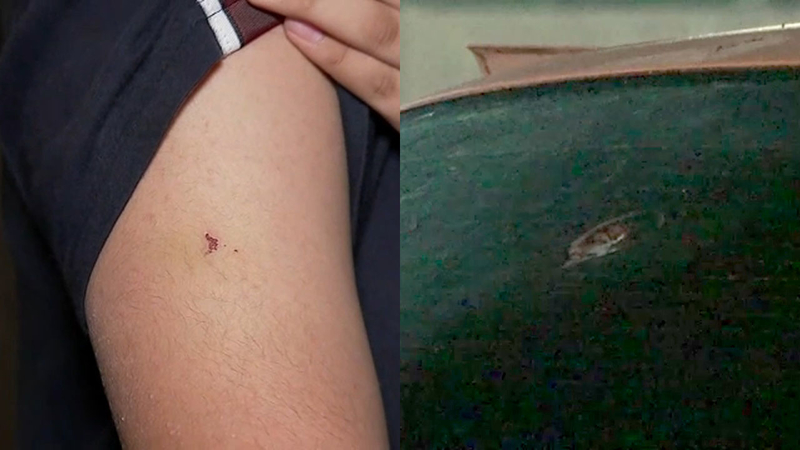 HOUSTON, Texas (KTRK) -- An 11-year-old boy was hurt by flying glass Friday night when he and his family were caught in the middle of gunfire as they were driving in northeast Harris County.

The boy, Abraham Rosales, showed ABC13 his injury. Thankfully, it is only a scratch from the frightening ordeal.

His father, Tony Rosales, said he was driving on the Eastex Freeway feeder road near Lee Road around 7:20 p.m. His three sons, including Abraham, were in the backseat. His wife was in the front passenger seat. He said they noticed two cars chasing each other and then the windshield of their truck was hit.

"We looked to the side and it was when we heard a loud bang," said Rosales.

A bullet went straight through the windshield, splitting the vehicle's EZ Tag. It hit the rear-view mirror and then ended up in the back seat. On Monday, duct tape held together the windshield.

Abraham, a sixth-grader, was hit by flying glass.

"What really scared me was when I asked the boys if they were okay, and then Abraham told me he felt something," his father added.

Tony pulled off the road. Another driver called for help.

According to the Harris County Sheriff's Office, men in two cars were fighting. The car with the shooter took off. Another bullet went through the back of a white car that stayed on the scene and struck a passenger in the arm.

Abraham's parents heard three gunshots in all and are thankful no one was seriously hurt.