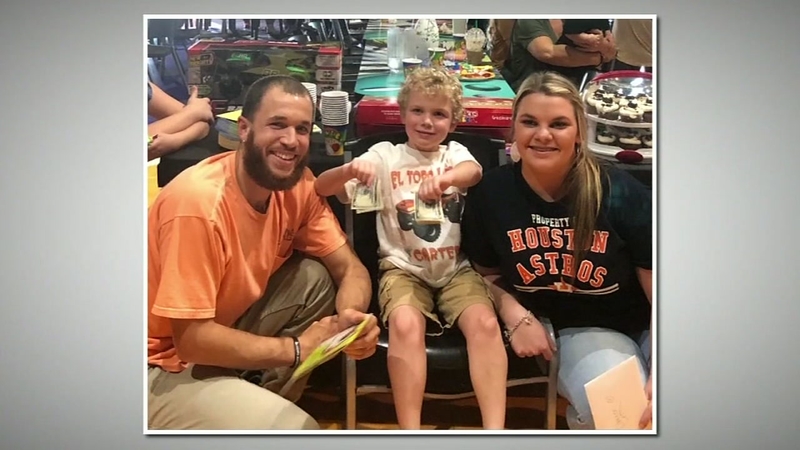 HOUSTON, Texas (KTRK) -- How do you tell a 5-year-old his father is never coming back? Lindsey Lorfing had to break the terrible news to her son, Carter, yesterday.

"God had to put it on my heart how to tell him," Lorfing told Eyewitness News. "He's just coping the best way a little boy, a child can cope. There's questions. It's hard to explain."

He was at a party on Waterside View Court in the Stillwater community in northeast Houston, where Houston police say Isaiah Kain Salas-Martinez, 20, showed up after getting a phone call from his drunk girlfriend.

According to investigators, Salas-Martinez was carrying a shotgun and a pistol. People tried to disarm him when a gun went off and Harrell was hit.

The 23-year-old, a standout high school football player, had recently graduated from welding school and was intent on being a good father. Gentle and compassionate is how relatives describe Harrell. His aunt says he was a bright light.

Investigators say Cole Harrell's death may have been accidental, but they are still questioning witnesses.

"If we can celebrate that, we can smile at that," said Jerri Cormier.

That's one way she's been able to take the tough but big step to forgive Salas-Martinez.

Police say he fled the scene with his girlfriend, but later returned to turn himself in. He has no criminal background in Harris County. He is now charged with murder.

"Unforgiveness is only going to hurt me. Even though it's hard and even though the young man did a great disservice to Cole and everybody that loved him, I forgive the young man," Cormier explained.

Lorfing is working to forgive while focused on their son.

"I have to be strong for him always," Lorfing said.

"He will never be forgotten," added Cormier.

The family has set up a GoFundMe account for immediate expenses. The rest will be for Carter's future.

A fight at a house party ended with a man being shot and killed overnight in Summerwood area.