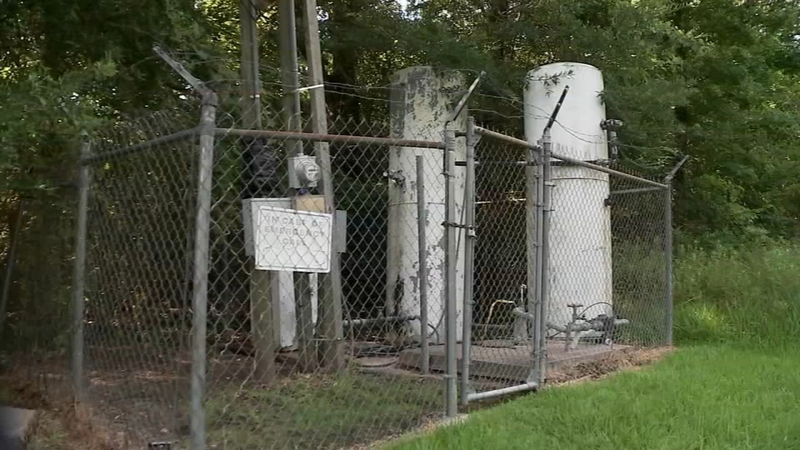 HARRIS COUNTY, Texas (KTRK) -- The Prater family has a lot of water, but virtually none of it is coming from their faucets.

"It's been like this since this past Friday and this isn't the first time this has happened either, so," Michael Prater said. "This was actually the shortest amount of time we've had no water. The last time was two weeks, I believe. It was two weeks."

His wife Aremy said they are desperate. They have two young children, ages 4 and 1.

"We fill jugs to flush toilets," she said. "We fill up little containers to wash dishes."

The problem is an aging well that serves 28 customers in east Harris County. They pay Villa Utilities every month for its use. But in March, they got a letter telling them to conserve water and maybe look at getting their own replacement. Then, the water went out, they say for the second time.

"We're kind of in this limbo," Michael said, "Where we don't really have anybody to reach out to because they can't do anything legally."

We called the owner, Norman Barnett. He denied he had anything to do with the well and hung up. But according to the state's Public Utilities Commission, he's the one responsible for the well.

The state told ABC13 Eyewitness News if the well doesn't work and he's not providing a service, he's subject to fines and penalties. But that's a process.

While the county has known about the issue since March, and is trying to work a deal through the county attorney's office, they can't repair the well because it's privately owned.

"The long and short of it is that this well operator has left this community dry," Harris County Commissioner Adrian Garcia said. "It's just ridiculous and we're trying to find answers for them."

There are more than 7,600 permitted wells in Harris County that serve more than one home. Many of them are privately owned.

What can you do if you have a problem with your water? File a complaint with the PUC and with the Texas Commission on Environmental Quality. That's what the Praters are doing now.

They'll likely dig their own well, unable to wait indefinitely for clean water from the tap. But they hope the well's owner is forced to fix the well for their neighbors or sell it to someone who will.