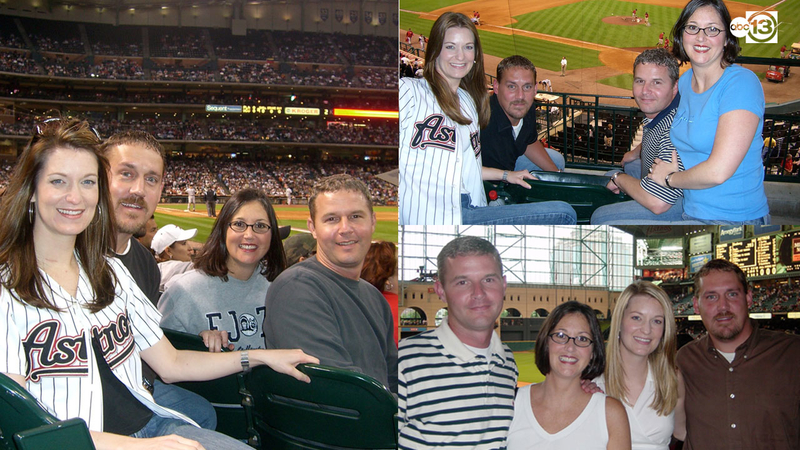 HOUSTON, Texas -- Two Houston couples say the Astros have helped them find everlasting love, and it's adding a romantic touch to the latest World Series run.

"I was in my mid 30s, I didn't know if I was going to be married," recalled Renee Hansen, who went to an Astros game in 2005 with her neighbor and good friend, Wendy Parker.

The two women sat in the club level, and spent most of the game cheering on former Astros catcher Brad Asmus. Chris Hansen and his childhood friend Kevin Parker took notice, and started chatting with the two ladies.

ABC13 met with the Hansens and Wendy Parker Wednesday to recount the couples' magical love story. Over crepes shaped like baseballs to celebrate the Astros World Series run, the friends shared how their romances blossomed.

"These guys were sitting right in front of us, and we ended up talking to them, so we met that night," said Renee.

"It's baseball, [the] biggest reason was to go to a game," expressed Chris. "Not to find a wife."

But fate had other plans.

They end up getting married.

Tonight, the story of two destiny couples & their ties to the #WorldSeries!

Renee and Chris connected almost instantly. He proposed five weeks after that baseball game, which was also the day before the first home World Series game ever for the Astros.

But it took a little longer for Chris' friend Kevin to ask Wendy out on a date.

"He had just gotten out of a relationship and [was] kind of anti-dating," said Wendy.

The ladies ultimately convinced Kevin to give it a go. A year and a half later, they also got married. Now, they have an 8-year-old daughter, Kennedy, who is also a big Astros fan.

"She's got T-shirts and jerseys, and wants to know first thing in the morning, 'Did they win last night?'" said Wendy. "She's into it."

Although the Parkers are unable to attend the game, the Astros are never far from their minds, either.

"I tell people, 'We met at an Astros game.' It wasn't just me and my husband, it was my husband's friend for 30 years, my nextdoor neighbor, and us living next to each other after we got married," said Wendy. "It was just destiny."

If the Astros win it all, the Hansens and Parkers will have one more element to add to their incredible life stories.