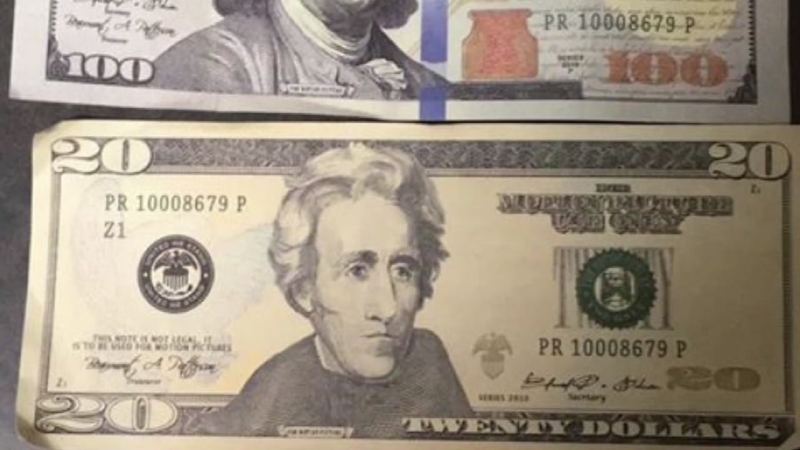 BRENHAM, Texas (KTRK) -- It's happened again: Fake money being passed off as the real thing.

Brenham police say counterfeit $20 bills have shown up at businesses in the area. This after a rash of fake money incidents earlier this year in Katy, Friendswood and west Houston.

The bills look like real cash, but contain the words "For Motion Picture Use Only."

The fake money also features a fairly obvious change to the face of seventh President Andrew Jackson in the form of a nose augmentation.

Authorities say if you have a business that receives cash payments, you should check all your bills carefully to make sure you aren't being ripped off.

They're encouraging cashiers and businesses to check bills they receive with a counterfeit pen. If the ink turns a color, it's most likely a fake bill.

A 16-year-old girl is in hot water after Friendswood police allegedly tied her to a fake money scandal that has been going on for months.

A constable in Fort Bend County said he's concerned after fake dollar bills were found at a Katy ISD school.

Report a correction or typo
Related topics:
brenhamthefttexas newsmoneybusinessscamcounterfeit
Copyright © 2021 KTRK-TV. All Rights Reserved.
TOP STORIES
1 killed after car crashes into tree in SW Houston, HPD says
Sisters walking to their car say they were hit by driver Saturday
No charges for 4 former officers who shot at unarmed man 21 times
Man accused in road rage shooting after Astros game appears in court
How do Houston's homicide numbers stack up with big US cities
Two wet weather systems rain on Texas this week
Here's how officials determine which migrants will stay in the US
Show More
Houston says final goodbye to HPD officer killed while serving warrant
Former Houston police chief Acevedo now at risk of losing Miami job
R. Kelly found guilty on all counts in sex trafficking trial in NYC
Teen intended to 'smoke' cyclists, but plowed into them instead
Meet the cast of Michelle Young's season of 'The Bachelorette'
More TOP STORIES News