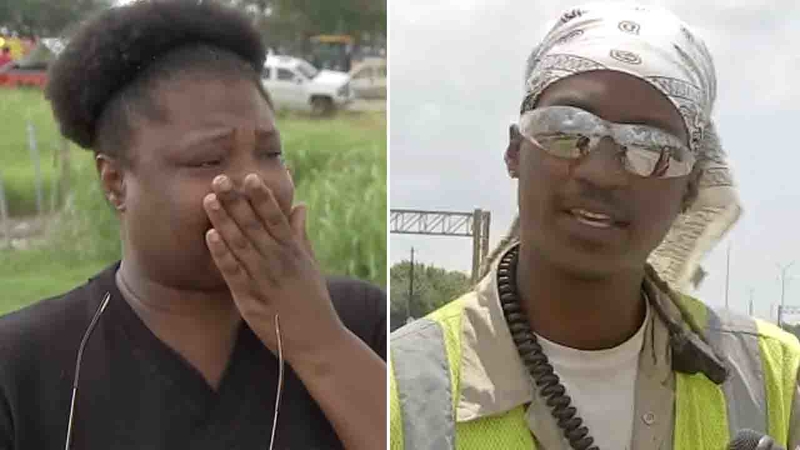 BAYTOWN, Texas (KTRK) -- A contractor inside an ExxonMobil plant in Baytown when it caught fire said all he could think was, "if it blows, we're all dead."

Freddy Landry, 22, was one of the workers at the olefins plant when a large fire broke out Wednesday morning.

Landry's mother Mary was desperately trying to reach him after the fire, telling ABC13 that he called her upset because the tank he was working near blew up, and he was trapped in the back.

Mary said that she had been calling and texting her son, but received no answer.

"We've been looking and he's not there," Mary said before he was found. "It's hard. I just want him out."

Mary said that she also told her son to have faith in God during the moments that she talked to him on the phone.

INTERVIEW: 'Just want him to know I love him... and I want him to come home safe'
EMBED More News Videos

A mother says she'd been texting and calling her son who works at the plant, but started to worry when she couldn't find him.

He told ABC13 that he heard an explosion and saw fire and people running. He thought there was a chance he wouldn't survive.

"You don't ask questions whenever you see that," Freddy said. "So we just took off non-stop, non-stop."

He said he told his mom, "If I don't make it home, I want you to kiss my wife and kiss my daughter, and let them know that was it."

Freddy said he was working with another employee who felt the blast and saw the fire shoot up.

"I told them to shut the crane off, and we started running," the employee said. "Five minutes later, we heard a second explosion. We didn't run far enough."

What we know about ExxonMobil facility in Baytown