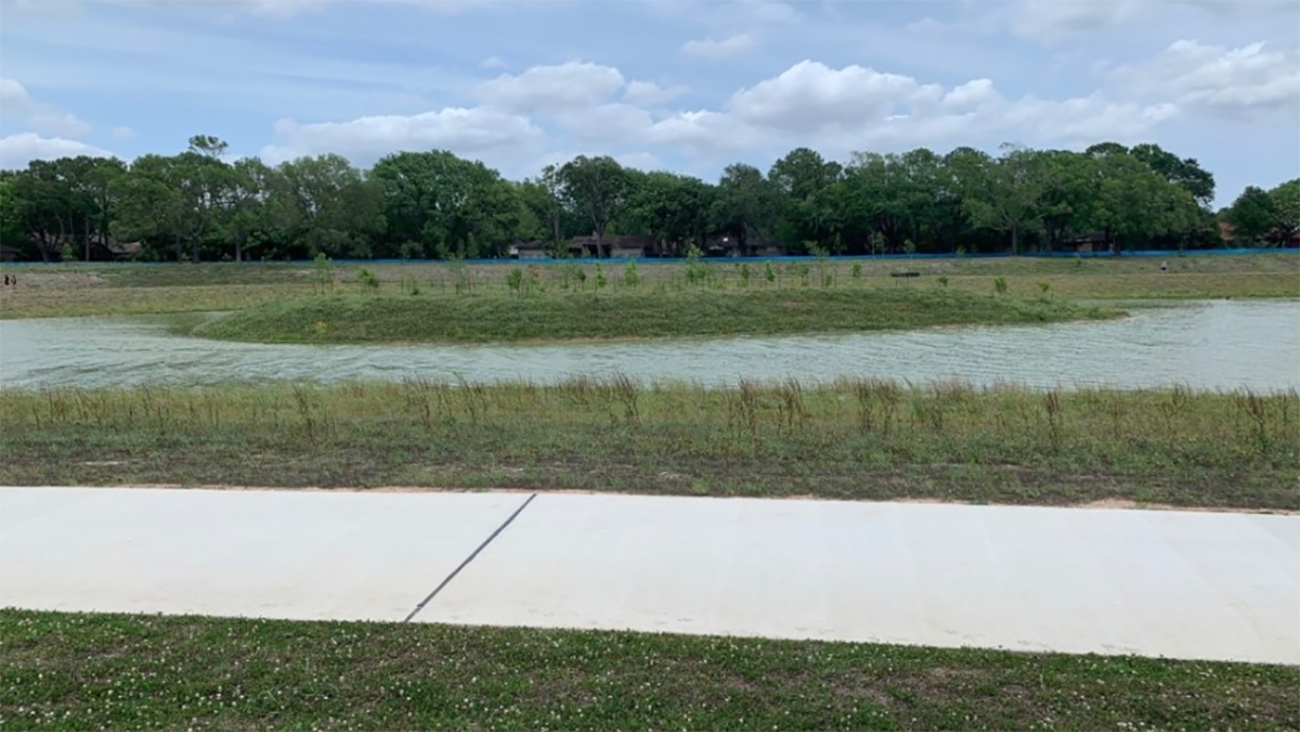 Exploration Green was named in honor of the community's local exploration legacy and its proximity to Johnson Space Center, per the release. Once finished, the conservancy will protect 2,000 to 3,000 surrounding homes from flooding in 12 to 15 inches of rain, leaders said.

Houston's downtown park scene is soon to become even better!

"With the recently completed Phase 2 undergoing a test from Tropical Storm Beta, it was a great indicator to see how well Phase 1 and 2 integrated together," Jennifer Morrow, CLCWA's general manager, said in the release. "This opportunity to provide retrofitted detention to a community previously struggling with drainage has been a huge benefit so far, and we are looking forward to completing the entire project."

Upon the project's completion, detention ponds and wetland areas will take up about 8 acres per phase, or just under 40 total acres. There will be five large detention ponds that can each hold 100 million gallons of stormwater, per the release-the equivalent of 750 Olympic-sized swimming pools.

"This is creating 100 acres of space that celebrates the cultural history of the park." Click play to learn how the park honors WWI soldiers.

Aside from stormwater drainage, the conservancy will also serve as a nature park, with 6 miles of walking and biking trails, two athletic fields available for use by local sports teams, and wetlands and native grassland areas, per the release.

From a former city golf course to a beautiful garden oasis, this new urban space is ready for the public

Exploration Green's amenities are funded entirely by grants and donations. In total, the project will cost between $40 million-$50 million to complete. The last piece of the puzzle will be an entry plaza on Phase 1 estimated to cost between $1.5 million-$2 million, Chair Frank Weary told Community Impact Newspaper in March. Once it is completed, nearly 70% of the 40,000 people living in the Clear Lake area will be within walking distance of Exploration Green, and the remaining people will be less than a mile from one of the phases, per the release.

The on-site nursery where plants are kept is maintained by volunteers, who play an integral part in planting trees and shrubs during the late fall and early spring. Planting should be completed by the end of 2022, Weary said in March.

During Hurricane Harvey, although only 80% of the Phase 1 pond was excavated at the time of the storm, it helped detain 100 million gallons of water, protecting at least 150 homes from flooding. Tropical Storm Imelda had minimal impact on the community the following year, and the project had no trouble withstanding Tropical Storm Beta, per the release.

The project has already played a major part in revitalizing home values in an area that was previously experiencing economic decline, per the release. Given that the conservancy protects homes from flooding, property values have subsequently increased, and flood insurance costs have dropped. Data from Paige Martin of Keller Williams Realty shows the price per square foot of Clear Lake-area homes went from $9 in 2016 to $17 in 2017, then $28 in 2018.

"Communities throughout Texas are looking for ways to mitigate major flooding events like Harvey, Imelda and Beta," said Wayne Swafford, LAN's president, in the release. "Exploration Green is transforming Clear Lake from a flood-prone community into one of the most flood-resilient communities in Texas. In addition, it is creating a healthy, sustainable neighborhood for its residents."